Portland writer and SFWA member David D. Levine won for his collection of short stories, “Space Magic,” published by Oregon publisher Wheatland Press.  The Award is accompanied by an honorarium of $1,000.00 and an engraved glass plaque.  Levine’s book is the first collection of stories to win the Award.

The other finalists were “Anathem” by Seattle, WA, writer Neal Stephenson; “Ill Met in the Arena” by Dave Duncan, who lives in Victoria, BC; “Long Walks, Last Flights and Other Stories” by Ranier, OR, writer Ken Scholes, and “A World Too Near” by Kay Kenyon, of Wenatchee, WA.

The Endeavour Award honors a distinguished science fiction or fantasy book, either a novel or a single-author collection, created by a writer living in the Pacific Northwest.  All entries are read and scored by seven readers randomly selected from a panel of preliminary readers.  The five highest scoring books then go to three judges, who are all professional writers or editors.

To be eligible for 2009’s Endeavour Award, a book — either a novel or a single-author collection — must have been published for the first time in English during 2008.  The majority of the book must have been written, and the book accepted for publication, while the author was living in the Pacific Northwest (Oregon, Washington, Idaho, Alaska, British Columbia, or the Yukon.)  Deadline to enter books published during 2009 is February 15, 2010. Full information on entering the Award is available on the Endeavour Web site: www.osfci.org/endeavour. 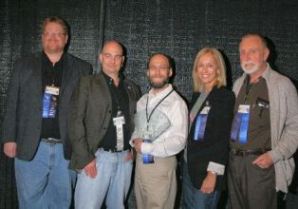