At a stoplight on our way out of town, my brother Paul says, “I hope we don’t get mauled by a beaver.” He hesitates in the middle of the word, uncertain whether he wants to say “bear” or “beaver.” Beaver it is, and his stilted pronunciation gets us both laughing. The light turns green. I take my foot off the brake and allow the last of Bartlesville–Arby’s, a furniture store, mom and pop cafes–to roll past us and disappear.

Our destination is Labadie Mansion, a derelict house that neither of us have ever seen, and the site of numerous accounts of ghostly activity. According to “sources,” the house is hidden by trees, with no visible road going to or from the grounds. It’s notoriously difficult to find, unless you know where to look, and even then you can miss it. We have a set of coordinates that will get us to a nearby graveyard, a few stolen notes from Google Maps scribbled in sharpie on a piece of graph paper, and a photo that will point us in the right direction, if we can first find the spot where the photo was taken. I’ve been to the graveyard once before, but neither I nor my friend Rusty could track down the mansion on that first trip. Hopefully, this photo–just a bridge, a tree-covered hill, and the words “Labadie Mansion” with an arrow pointing into the dense woods–will be the key that unlocks the way.

As we drive through Oklahoma’s back roads, past lakes and fields and skeleton trees, I give Paul a quick overview of the legends surrounding Labadie Mansion. “It’s a whole thing. Multiple murder. Slaves. Infidelity. Curses. It all changes depending on who you ask.”

I tell him I doubt it. A few of the names match up, but that’s all. The stories that ring most true to me involve the family dying of disease, one member at a time, sometimes only days apart–a tragedy, but not a ghost story.

When we get to the graveyard, I find myself strangely disappointed. On my previous visit, the graveyard felt ominous and exciting, but in the light of day, it feels bare, easy to find, and completely without atmosphere. I walk among the gravestones, looking at the names and dates, thinking how easy it would be to take down these few hard facts and concoct a new legend to add to the Labadie mythos. Many people cling to accounts of paranormal activity, often saying something like, “I’ve known Carl for twenty-five years, and if he says he saw something, I believe him.” But as a writer, I completely understand the compulsive need to occasionally (it’s time to be honest, ironically) make shit up, and when you look at things that way, it’s not hard to understand why people tell stories of ghosts and abductions and the jersey devil. When you look for something hard enough and really believe you’ll find it, you tend to find it (or something that affirms your belief in it). And when you’re not comfortable saying “Hey, I just thought something up! Ain’t it cool?” it’s easy to let creative ideas drift over into reality in hopes of finding a home. That’s mostly why I’m disappointed. If I feel something on this trip (honestly, down-in-my-bones feel something) then maybe it’s all real. Maybe it’s okay to believe the way I used to.

We decide to head for the mansion, hoping to have more luck there. We find the bridge in the picture and spot the hill more easily than I expected. The photo makes all the difference. Rusty and I walked in a completely different direction on our previous visit. I park the car, and we cross a barbed wire fence–“Touch it to see if it’s electric.” “You touch it.” “No, you touch it.”–into a field full of horses. When I say “full of horses,” I mean this is the most horses I’ve ever seen in one place. There must be a couple hundred of them, ribs showing, coats every shade of earth, square-faced, long-maned, and skittish. As we pass along the edge of the field, dozens stop dead in their tracks and watch us. Forget being mauled by beavers, the horses become my real concern. A few turn and run away, manes flowing, their hoof beats out of sync with their steps, the sound like gunshots and hammer strikes, dulled and delayed by distance. We watch in awe. “I never see horses run anymore,” Paul says. “They’re all too tame. They just stand there.” I rarely see horses at all anymore, I think to myself. It seems like a shame. (The weather and the call to adventure have me in a damn-the-indoors mood.)

We’re forced to cross rivers three times, and each time it is a beaver dam that makes it possible. They look all brittle sticks and rotten logs, but Paul and I discover the main component in a beaver dam is mud, packed down tight like clay. We walk across three separate times–two men, 300 lbs. each–and scarcely get the soles of our feet wet. Suddenly, I feel bad for talking bad about beavers. The rest of the walk is pure work, up-hill through thorns that grab at our pants, over rocks that threaten to trip us up. We come over a rise to find another dip in the terrain. “We have to cross another river,” Paul says.

“Yeah, I am,” he says. “Look. It’s a road.” Sure enough, it is a road, overgrown with grass until not a single stone or patch of dirt is visible. It is smooth, flat (preferable to thorns and rocks) and circles gently around the hill. We follow it. 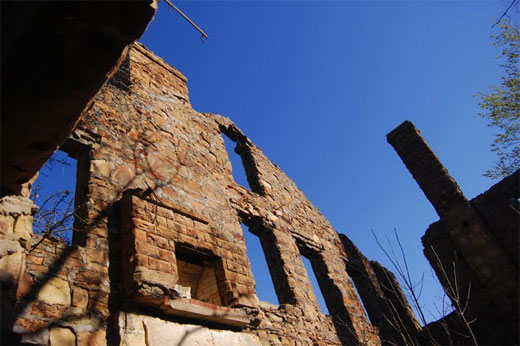 The mansion rises out of the reaching fingers of the trees, looming like a giant in our path. At first, it is just a black shape with sky-colored holes for windows, but as we round the corner, the beginnings of sunset bathe the walls orange and we get our first glimpse into Labadie Mansion’s former glory. We walk forward, aware of each step crunching in the dry grass. Beside me, Paul begins snapping pictures. The stillness of the place is heavy, and the stark sterility of the house surprises and disappoints me. No wood remains. The roof and floors are gone, and only the sturdy shell of rough bricks and mortar still stands. No wandering from room-to-room if there are no rooms left.

As we move closer, I see lichen growing on the walls that is so vivid in color I at first mistake it for paint. I have never seen anything like it, and I desperately wish I had a black light. Around back, we discover the semi-collapsed stables that presumably once held horses. Someone has spray-painted Turn Back or Die on one of the walls. We don’t turn back, and we don’t die. Later, in the yard, we find a dead cat (at least I think it’s a cat; it could be anything) floating in an open well of some kind. The smell doesn’t reach far, but as I approach, it almost doubles me over. Paul snaps a picture, and I turn the corner. Not what I came to see. 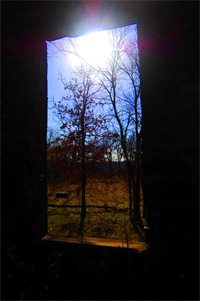 With our sweep of the area complete, we walk back to the mansion and lean in the windows, hands resting on the cool stone. I still don’t feel anything remotely spooky. “All the accounts say the hauntings start when you step inside,” I tell Paul.

“Makes sense,” he says. We enter through a door, stepping into the ruined parlor, the floor and fireplace overgrown with saplings. To my surprise, I feel something. I don’t feel cold or get the sense that I am being watched; I don’t hear voices or footsteps; I don’t smell food from the kitchen, or soap, or blood. What I feel is wonder and–this more than anything–sadness.

I imagine what the house looked like new: three fireplaces, a kitchen, a stove, hot water for the bath, three or four quaint little upstairs bedrooms. I imagine the family crossing the threshold for the first time, feeling proud, feeling excited about the life they are about to begin beneath it’s now missing roof. I stare at the large fireplace in the parlor, and I can clearly picture a family coming in from the cold, pulling off their wet socks and putting their feet up to get warm. I stand in the back door to the kitchen and wonder how many times a mother stood in this same spot, calling her family in for supper hot off the stove. I wonder how many baths were drawn in the now cracked, rusted-out tub. I stare in awe at a thirty foot tree growing in the middle of where the parlor had once been. Around the base of the tree, half-grown into the wood, is the metal remains of a piano, the pegs that held the strings clearly visible. I imagine the house filled with music as little girls and boys clinked and clunked their way through their mother’s piano books. I picture life inside this old house, and suddenly I feel something else: I feel angry.

You can scarcely step inside Labadie Mansion without stepping on beer cans and broken bottles. Trash litters the fireplaces and spray paint streaks the walls. “Why would people do this?” I ask. Paul just shakes his head. It’s not just the disregard for the remains of the house that bother me, but the whole legacy of the family that once lived here and what that legacy has become. They lost their lives, each other, then decades of blizzards and fires and spring storms took the remains of their home, and now, thoughtlessly, gossip has taken their story away from them as well. As I stand in the shell of the house, the sun setting behind the trees, I find myself wishing I could somehow give these people back their story. I think what you are reading is my attempt to do that.

Paul and I turn our backs and walk away from Labadie Mansion. Paul stops a few times to snap a picture or two, and I plod forward, thinking about human nature, about our tendency for destruction and disrespect. Regard and understanding, I realize, are much harder things, things that take incredible intention, and as I watch the old house disappear behind the hill, I realize regard can be a heavy thing to carry.

I text Rusty on the way back to the car, telling him that we finally did it, we found Labadie Mansion. A moment later, my phone chimes back. “Was it haunted?” he asks. “I’ve felt more vibes in my bathroom,” I reply. “Of course,” he says. I smile and text him back. “I could make something up if you like. 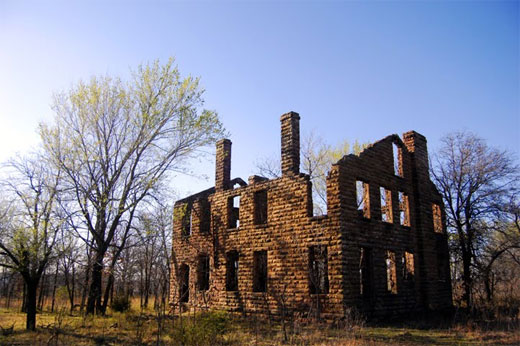 Steve grew up listening to his dad’s ghost stories and never recovered. He attended Uncle Orson’s Literary Boot Camp in 2009 and currently lives in Oklahoma in a small house full of girls. His stories have appeared in Intergalactic Medicine Show, Daily Science Fiction, and (forthcoming April 24th) Brain Harvest. This post originally appeared on his blog. Photos by Paul Stewart.