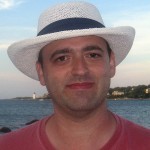 I’ve seen some great midgrade or YA authors stumble through their first attempt at genre fiction. Some of them apply science fiction trappings to a traditionally terrestrial plot, mostly by making up funny names that don’t have any world-building logic behind them. As a result, their work may look something like this:

Yes, there tend to be strangely-named people, places, and things in stories that involve alien worlds and futuristic technologies, but that doesn’t give you license to mash your fingers on the keyboard and call it vocabulary. Names in your story should be internally consistent, make sense for the culture or cultures that you are depicting, and be at least somewhat pronounceable. You need to adequately define your terms for the reader, hopefully by context rather than by exposition. And if you are describing an object that could be several generations removed from a familiar object the readers already know, consider using some variation of the more common name.

A machine that creates gourmet meals-on-the-go in exchange for credits is still just a vending machine. If it pulls the orders directly out of a user’s thoughts, the manufacturer might put the machine into a generic “psycho-activated meal vender” or “press-free meal vender” product category to distinguish it from the push-button version. The marketing department might dub it the “Thought Chef 4G” or “Mecha-Emeril.” And finally, your character might come up with a snarkily disparaging nickname like “Puke Spew 4G” or “Mecha Garbage Dispenser.” Calling it a “Vend-o-Tron” or “Food-o-Mat” will only make people think you’ve freshly arrived from the 1950s, when those terms still sounded futuristic.

Writers who are new to science fiction may also underestimate the importance of getting the science right. Not right like a textbook but right as in plausible, given the things we’re pretty sure about, the gaps where our current knowledge is incomplete, the author’s logical extrapolations made in good faith, the needs of a good story, and general reader expectations. Einstein claimed that faster-than-light travel is impossible and he hasn’t been proven wrong yet, but FTL-ships are entrenched in the genre by decades of tradition. Readers have come to accept planet-hopping starships as a science fiction convention because they are a necessary device to enables a huge subset of stories. Plus, with all we’re still learning about the fine structure of the universe, it’s still possible that Einstein will be overturned in some special case that will make ships like these possible. An author gets some latitude when you’re dealing with a topic on the cutting edge of science, but you’d better not flub the basic stuff without good reason.

Things can also go wrong when folks who are used to writing science fiction for adults take a stab at the young adult or middle grade market–without changing their style or voice. Interesting as the premise of your adult-oriented novel may be, you usually can’t just drop the protagonist’s age, remove the explicitly adult material, and call it children’s literature. For one thing, your adult-oriented novel is likely to be 50,000 to 100,000 words too long–and allow me to cut you off before you begin a protest with, “But kids loved that 9,000-page Harry Potter novel…” J.K. Rowling had to establish herself specifically as not like the rest of us before her publisher let her release a middle-grade book of that length.

Your adult-oriented writing likely contains adult-oriented bloat: slow, mood-establishing exposition; detailed descriptions of landscapes, room furnishings, and fashion accessories; meandering plotlines; superfluous subplots, and dialog that doesn’t advance the story. Adults will slog through and applaud your fine literary style, but Kids won’t put up with any of it. And if you lose your readers on Page 1, you’ve lost them forever. For young readers, you need appropriate pacing, linear storytelling, a kid-friendly voice, and a protagonist who is actively involved in resolving the plot. You will also need to spotlight some of the themes young readers care about most: family, friends, school, relationships, and the challenges of entering the adult world.

Greg R. Fishbone is an author of galactic fiction for young readers, including the Galaxy Games series of humorous middle grade sci-fi novels from the Tu Books imprint at Lee & Low Books. Greg also serves as an Assistant Regional Advisor for the New England regions of the Society of Children’s Book Writers and Illustrators, is a two-time NESCBWI conference co-director, and founded of the Class of 2k7 debut author group. This summer he participated in the NASA and NSF-funded Launch Pad program at the University of Wyoming, intended to provide authors with better knowledge of astronomy and theories of science literacy. Visit his website at gfishbone.com for more information.