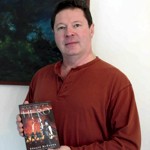 Reluctant privateer Robert Fenaday searches the stars for his lost love, Lisa, a naval intelligence officer whose ship disappeared near the end of the Conchirri War. He’s joined by the genetically engineered assassin, Shasti Rainhell, whose cold perfection masks her dark past. Both are blackmailed by government spymaster, Mandela, into a suicidal mission to the doomed planet Enshar. Leading a team of scientists and soldiers, they must unravel the mystery of that planet’s death before an ancient force reaches out to claim their lives. 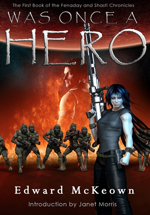 “The classic Planet Stories of S/F have suffered abandonment, without a rescuer, until now. Edward McKeown’s Was Once A Hero combines adventure and romance with the dark humor and human complexities absent from a more black-and-white age. Robert Fenaday and Shasti Rainhell are real people. They make mistakes, they hurt, they stumble in the dark emotionally, and they save the world. They are flawed, wounded heroes, and they make you realize, as you hungrily turn each page, that the best fiction contains excitement and passion; and the best aspect of life is the possibility of personal redemption. Was Once a Hero provides both.”  ~Tim McLoughlin, author of Heart of the Old Country (Movie Title: The Narrows) and Editor of Brooklyn Noir.