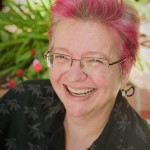 Are you putting words on the page? Then you are doing it right.

Someone once said to me at a party, “I would write, but I need to conquer some inner demons first.” And honestly — in my opinion, that’s bullshit unless he was talking about the inner demon of procrastination and not just being a pretentious jackass. Because, come on – who says that kind of thing and takes themself seriously?

When I teach, we do a lot of writing exercises. And I hear people say, just before they read what they’ve produced, “I’m not sure I did this right.” And then they go on and read me something wonderful. Maybe it’s not exactly what I was envisioning when I came up with the exercise. Maybe they’ve turned the exercise on its head and done something completely different. But that’s okay. The only way they could do the exercise wrong, in my opinion, is to not do it.

I have seen stories workshopped that were…sometimes difficult to say much about. Some are seared on my memory; others kept me up at night trying to figure out what to say. Some were politically a bit problematic. But you know what? At least they got written.

If you are writing, you are being a writer. If you keep at it — and think about writing and getting better — you will get better. There are things you can do that will help you get better faster, but all of them depend on…well, you should know what I’m going to say here by now….writing.

If it’s fear of getting it wrong that’s stopping you, then knock it off. Here’s the reassurance you need. You cannot do it wrong.

Cat Rambo’s short stories have appeared in such places as Asimov’s, Tor.com, and Clarkesworld Magazine. She is the former editor of Fantasy Magazine and currently serves as Vice President of SFWA. Find links to her work at http://www.kittywumpus.net, where this post first appeared.