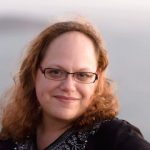 If you’re planning to attend Worldcon in Helsinki this year, you might be wondering how much Finnish you’ll need to learn in preparation for your trip. The answer is: not much. I’d been studying Finnish for months before my trip this winter, and I learned that these five words were the only Finnish I needed to use:

* anteeksi (rhymes with “GONE tech sea”) – excuse me; sorry. For getting someone’s attention, getting someone to move out of your way, or apologizing if you’ve gotten in the way.

* kiitos (sounds like “KEY toes”) – thank you. Say this when someone holds a door for you, or at the end of a transaction.

* huomenta (hwoa-men-ta) – morning. The books will tell you that “hyvää huomenta” is good morning, but in practice people just say “morning.” When someone greets you (“hei hei” or “huomenta”), you can return the greeting in Finnish and then switch to English. At the airport, I might greet the counter representative by saying: “Huomenta, good morning. I’m here to check in.”

* päivää (rhymes with LIE hat, without the “t” at the end) – day, or afternoon. Use the same way you’d use huomenta, for the bulk of the day.

Finns speak excellent English. The moment they see your American passport, hear you talking with your companions, or notice you’re ordering off the English side of the menu, they automatically speak to you in English. If you return their greeting in Finnish, the first complex question they ask (in my case, it was “Would you like a plastic bag for this purchase?”) will prompt you to give them a certain kind of blank stare, which they will take as their cue to switch to English. This will happen before you even have a chance to use that awesome phrase that means “I’m sorry, I don’t understand.” (Anteeksi, en ymmärrä.)

Is Finnish as Hard to Learn As They Say?

It isn’t. No, really. Finnish isn’t that hard, actually. In some ways, Finnish is simpler than English. Finnish developed in relative isolation (it is NOT a mixing pot of received words the way English is), so its rules are remarkably consistent.

In general, the emphasis is on the first syllable of every word.
Finnish is not a gendered language. We think English isn’t a gendered language, but Finnish takes it a step further: there is only one pronoun for he/she and his/her. (And it isn’t “they.)
All letters have one pronunciation only. A letter’s pronunciation is not dependent on the letters around it. (This one can actually be hard for English-speakers to adopt, but it’s quite refreshing once you get used to it.)

Y is always a vowel. None of this wishy-washy “sometimes” stuff.

If it seems hard, it’s because:

It’s not Latin-based. English-speakers, especially the ones who grew up with Spanish or French lessons in school, are used to Latin roots in our European languages, and Finnish doesn’t provide that. It’s not a Germanic language either, though it shares a few properties with German. (Finnish has two living relatives: Estonian and Hungarian.)

In the US, we’re conditioned to be afraid of really long words. Those properties Finnish shares with German? One of them is that words accumulate suffixes, and that leads to some very lengthy strings of alphabet soup. I’m the kind of reader whose eyes automatically blip over very long words. That works in fantasy novels, where I can expect pattern recognition to come to my rescue when I see those words again, but it’s a reflex that needs to be untrained in order to make progress in Finnish.

Dots. Umlauts. Dots over letters can be intimidating if you’ve never encountered them before. Don’t fear the dots. Look up “vowel harmony” if you’d like to learn how they work.

A DOUBLED VOWEL is held a little longer but with the same basic sound as a single vowel. Hyvää is pronounced “HU-vaa” rather than “HU-va.”

(If you see the letters Å or Ø, then you aren’t seeing Finnish. You’ll see these letters IN Finland, because Finland is a multi-lingual country, but anyone who tries to tell you that a word with an Å or Ø in it is Finnish is a person who doesn’t know their Scandinavian languages.)

* Joo – yes (informal). Pronounced “Yo.” The extra O doesn’t turn into an ooh sound like in English, it just prolongs the O. This is a good example of every letter retaining their sound despite context.

* Suomi – Finland’s word for Finland. Suomea is the Finnish language. Anything specifically Finnish might have this in its description or as the root of a word with various suffixes.

* kirja – (KEER-ya) – book. Anything involving books will have a form of the root “kirja” in it. Kirjakauppa = book shop. Kirjasto = library.

Gabrielle Harbowy, an Active Member of SFWA, copyedits professionally and is a submissions editor at the Hugo-nominated Apex Magazine. Her first novel, Hellmaw: Of the Essence, is available from The Ed Greenwood Group. She also has a Pathfinder Tales novel, Gears of Faith, coming from Paizo in April 2017. After several months of Finnish language study, she recently visited Helsinki and Lapland as research for a forthcoming project. More research is definitely required. Visit her online at @gabrielle_h or gabrielleharbowy.com.