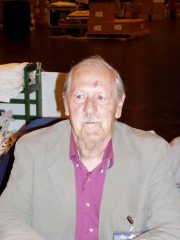 Named a Grand Master by SFWA in 2000 and inducted by the Science Fiction Hall of Fame in 2004, he also won two Hugo Awards, one Nebula Award, and a John W. Campbell Memorial Award. His influential works include the short story “Super-Toys Last All Summer Long,” the basis for the Stanley Kubrick-developed Steven Spielberg film,A.I. Artificial Intelligence. Other works included–Greybeard, Hothouse, and the Helliconia Trilogy.

He was elected a Fellow of the Royal Society of Literature in 1990. Aldiss was the “Permanent Special Guest” at the annual International Conference on the Fantastic in the Arts (ICFA) from 1989 through 2008. He was also the Guest of Honor at the conventions in 1986 and 1999.

In addition to his writing awards, he was awarded the title of Officer of the Order of the British Empire (OBE) for services to literature in Queen Elizabeth II’s Birthday Honors list, announced on 11 June 2005. In 2008, he was awarded an honorary doctorate by the University of Liverpool in recognition of his contribution to literature.