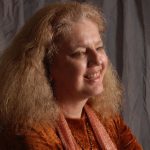 At a recent meeting of my writers’ group, we discussed fight scenes while critiquing an early draft of my novel in progress. The discussion went something like this:

“Women fight differently from men,” one of the guys said in pointing out that the sword fight scenes didn’t vary much.

I didn’t think he was referring to the inaccurate stereotype that women can’t fight, but I also didn’t think his point applied, so I said – speaking as a long-time martial artist and instructor as well as a writer – “In my experience, that’s not always the case, especially with weapons.”

I let it go at that, because he was right that the fight scenes needed work, but it bothered me. After some reflection, I realized what the problem was: If my experience isn’t key to discussions about how women fight simply because I’m a woman about the size of the average U.S. man, then the issue isn’t biological sex or gender; it’s body size and build. The average man may be bigger than the average woman, but there are plenty of small men – and big women – in the world. Also, there are some people who don’t fit into standard gendered categories, and they, too, come in a variety of body types. As writers, if we make assumptions about fighting styles based on sex or gender, we’re not going to create scenes that reflect the complexity of real fights.

There is only one situation in which writers should give some consideration to the gender of their fighters, and that’s if they are creating a world in which the culture puts distinct rules on gender behavior. Most current societies give girls and boys very different signals from an early age, with the girls getting the message – incorporating it into their bodies – that they aren’t capable of handling themselves physically in dealing with men, and the boys, regardless of size or skill, learning that they have power over women. In a world in which calling men and boys “girls” (or much less acceptable words for female) is a major insult, women who fight will have to deal with the cultural dynamics.

So if you’re writing a story that includes women warriors, you must give some consideration to societal rules. Is it a society that generally accepts both men and women as soldiers and fighters or is it one that assigns very different roles to each gender, so that a woman fighter must struggle against society to make her place? Women who grow up being told they aren’t capable of competing against men have to deal with that while they’re learning to fight. Men who grow up being told that women are physically inferior have difficulty accepting that women can be good at the arts of war.

However, if your world assumes a higher level of gender equality, women fighters aren’t going to struggle with that particular demon and men aren’t going to make wrong assumptions. In my novel in progress, the culture recognizes both men and women as soldiers. So for my work, and others like it, gender differences are not relevant to fighting styles. But body type is always relevant.

Here are a few ideas about how different body types affect fighting gleaned from my thirty-eight years in martial arts:

Now that I’ve given the issue some thought, I’m off to rewrite my fight scenes. I think I’ll make one of my male characters short, but very quick and flexible, and one of my women tall and muscular. It’s always fun to play against type.

Nancy Jane Moore is the author of the science fiction novel The Weave as well as a number of shorter works of fiction. She holds a fourth-degree black belt in Aikido and has also trained in Karate and Tai Chi. For several years she was the chief instructor of the University of Maryland Aikido Club and she also taught regularly at Aikido Shobukan Dojo in Washington, D.C. She now lives in Oakland, California, with her sweetheart and his cats.

A collection of essays exploring the lives and tales of remarkable writers who used fairy tales to critique – and in a few cases, support – the absolutist rule of Louis XIV.

J.R.H. Lawless is a bestselling SF author from Atlantic Canada who blends comedy with political themes — drawing heavily, in both cases, on his experience as a lawyer and as Secretary General of a Parliamentary group at the French National Assembly.