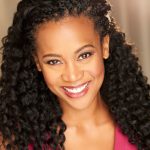 The Science Fiction and Fantasy Writers of America (SFWA, Inc.) is pleased to announce that Aydrea Walden has been named the toastmaster for the 55th annual Nebula Awards on May 30th, 2020 in an online ceremony.

Walden has written for the series Yin Yang Yo! and created, written, and starred in the Webby-nominated series Black Girl in a Big Dress.  She has worked in the animation department on the films The Croods, Home, and How to Train Your Dragon: The Hidden World.  Walden also performs, appearing in her one-woman show, The Oreo Experience: A Total Whitey Trapped in a Black Chick’s Body, the short film Sci-Fi 60, and an episode of The Mandalorian.

The Nebula Awards will be presented during the 2020 Nebula Conference Online during a live-streamed ceremony at 8 pm Eastern on May 30th. The conference, which will run from May 29th-31st, includes panels, solo presentations, conference mentorships, workshops, forums, chats, and virtual room parties (including a dance party hosted by John Scalzi). A portion of the funds raised for the conference will go to assist SFWA members financially affected by COVID-19.

The Nebula Awards, presented annually, recognize the best works of science fiction and fantasy published in the United States as selected by members of the Science Fiction and Fantasy Writers of America. The first Nebula Awards were presented in 1966.