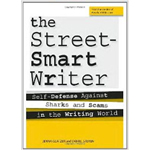 Today, author Marian Perera reviews a book I often recommend for writers who are interested in learning the basics of self-protection in the shark-infested waters of writing and publishing: The Street-Smart Writer, by prolific author Jenna Glatzer and publishing attorney Daniel Steven.

When writers are curious or concerned about literary scams, they can check out websites and discussion boards, of which there are several – such as Writer Beware and Preditors and Editors. Or they can pick up one book: The Street-Smart Writer, by Jenna Glatzer and Daniel Steven.

Subtitled “Self-Defense Against Sharks and Scams in the Writing World”, this book is both a good introduction to and a comprehensive overview of just how many ways writers can be taken – not only by outright scammers, but by well-intentioned people who nevertheless lack relevant experience or resources. It was released in 2005 but is just as timely today, with one exception that I’ll mention later.

The book touches on all types of literary scams, from agents to screenwriting to contests, but it also goes into detail to show how scammers profit even if they charge nothing upfront or only want small payments. These modest sums can slip under the radar. But a ten here and a twenty there can add up to thousands of dollars, depending on how many writers fall for it.

The warnings are backed up with plenty of horror stories – such as the case of a magazine called Zatz, which took copyright, paid nothing for articles and defended this on the basis that “real writers could always produce more.” According to the magazine’s Vice President, “If your main priority is eeking [sic] out every bit of cash mileage from a piece of writing you can, than [sic] you are scarcity conscious and no kind of artist.”

My favorite, though, was the writer who created a fake contest where, for a five-dollar entrance fee,  contestants would be sent a chapter to edit. There was a modest grand prize for the winner – and major potential savings for the writer, who was hoping to have her entire book edited that way.

From five dollars, to the five million that Edit Ink raked in, scams come in many forms and sizes.

The Street-Smart Writer is informative and blunt, but also fair – for instance, it describes when and how self-publishing can work for writers. With plenty of examples and suggestions that can be followed up on, it’s helpful for writers in any field, whether they’re entering short stories in contests, querying agents, or checking out CreateSpace.

Most important, though, it advocates a mindset of caution and healthy skepticism, encouraging writers not to be either rushed or intimidated into anything.

Information on what to avoid is balanced out with advice on what to do – subscribe to Publishers Weekly, check agents’ track records, assess contracts. Every aspect of writing and publishing – conferences, contests, seminars and e-zines – is mentioned if not evaluated. I especially liked the part on blacklisting, whether this threat is made by a legitimate person or by a scammer when writers speak out about their experiences.

Finally, there’s an entire chapter on the legalities of the business, from plagiarism to parody, and an appendix of forms that includes a sample literary agent’s contract, film option agreement, publisher’s contract, and so on, to give writers a basis of comparison.

The only vanity presses not mentioned are those that are branches of legitimate publishers, such as Harlequin’s DellArte Press and Thomas Nelson’s West Bow Press – but these are relatively recent developments that post-date the book’s publication. The Street-Smart Writer is helpful, meticulous, upbeat (despite the horror stories), and a good way to render most scam sharks toothless.

Marian Perera studies medical laboratory technology (final year of college!) when she isn’t writing. Her first novel, a romantic steampunk fantasy called Before the Storm, was just released in paperback. She blogs about writing, publication and every step between the two at Flights of Fantasy.