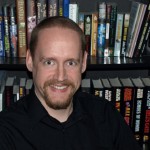 A Nebula Award winner, Hugo Award nominee, and winner in the Writers of the Future Contest, Eric James Stone has had stories published in Year’s Best SF 15, Analog, Nature, and Kevin J. Anderson’s Blood Lite anthologies of humorous horror, among other venues. One of Eric’s earliest memories is of seeing an Apollo moon-shot launch on television. That might explain his fascination with space travel. His father’s collection of old science fiction ensured that Eric grew up on a full diet of Asimov, Heinlein and Clarke.

While getting political science degree at Brigham Young University, Eric took some creative writing classes. He wrote several short stories, and even submitted one for publication, but it was rejected and he gave up on creative writing for over ten years.

During those years Eric graduated from Baylor Law School, worked on a congressional campaign, and took a job in Washington, DC, with one of those special interest groups politicians always complain that other politicians are influenced by. He quit the political scene in 1999 to work as a web developer in Utah.

In 2002 he started writing fiction again, and in 2003 he attended Orson Scott Card’s Literary Boot Camp. In 2007 Eric got laid off from his day job just in time to go to the Odyssey Writing Workshop. He has since found a new web development job.

In 2009 Eric became an assistant editor for Intergalactic Medicine Show. Eric lives in Eagle Mountain, Utah. His website can be found at www.ericjamesstone.com.

First of all, congratulations on the Nebula win.  Can you tell us what was going through your mind before you were announced as the winner?

I’ll actually go back a bit before the reading of the nominations to give some context.  During the days before the awards ceremony, people kept asking if I was nervous.  I always replied that I wasn’t, because I didn’t think it likely I would win and so I was just enjoying the honor of being a nominee, but that I was preparing a speech just in case.  However, when the nominees in the short story category were announced, I realized that my palms were sweating: I was nervous.  I tried to calm myself, and as John Kessel read the nominees I applauded for the others in the novelette category.  Since the pattern in reading the nominees was the story name, followed by the author’s name, when John opened the envelope and started reading the winner I was expecting a title to come first, but instead he said my name.  It took a moment for me to process that, at which point I was shocked and elated.

Your story is titled “That Leviathan Whom Thou Hast Made.”  How did you come up with the title?

In coming up with a human-language name for the largest of the “swales” (gigantic plasma beings living in the sun), I felt the word Leviathan seemed appropriate.  Since there was a religious component to the story, I searched the Bible for verses that included the word, and found Psalm 104:26.

Can you explain to us the genesis of the story?

In the fall of 2008, I attended a writing workshop taught by Dean Wesley Smith, Kristine Katherine Rusch, and Sheila Williams.  One of the assignments was to write a story with the main character based on myself in some way, set in the middle of the sun, facing the problem “can’t get a date.”  Because I could not recall reading a story in which the main character was a faithful Mormon in a high-tech far future, I decided to use my religion (and my singleness) for the main character.  The idea of alien beings living inside the sun provided one possible conflict, and I combined that with my general dislike for the Prime Directive in Star Trek in order to come up with a reason to interfere in alien culture.  I wrote the first third of the story at the workshop, and the response was positive enough that I went ahead and finished it over the next few months.

Where do you go from here? Will you continue writing short fiction, turn to novels, or continue working in both the long and short forms?

I’ve already written a couple of novels, one of which I’m currently serializing on my website, while the other is under submission at a traditional publisher.  I plan to continue working in both long and short forms.

Who do you identify as the major influences on your writing style and in what ways were you influenced?

The first real science fiction I read was by Eric Frank Russell, and I think some of my humorous science fiction is reminiscent of his. I also read a lot of Asimov while growing up, and one of the greatest compliments I’ve received as a writer was a reviewer saying one of my stories could have been written by Asimov.  More direct influences on my writing include writing teachers: I attended Orson Scott Card’s week-long writing workshop and the six-week Odyssey workshop taught by Jeanne Cavelos.

My collection, Rejiggering the Thingamajig and Other Stories, officially comes out in September from Paper Golem Press. It will include one never-before-published short story along with 23 reprinted tales, including the Nebula Award winner.  I have various short stories scheduled to appear in Analog, Daily Science Fiction, and InterGalactic Medicine Show, among other places. As for projects still inside my head, I hope to start and finish a third novel within a reasonable time, and I have various short story ideas I’m playing with.