Over the past few days I’ve gotten a number of inquiries from authors wondering about the reputation of a PR firm called The Albee Agency. Albee bills itself as

[A] new breed of book publicists-
We offer a proven track record… we have a global reach, we provide individual personal service and our staff is diverse and highly qualified to assist you in all your publicity and marketing needs. We combine know how with cost effectiveness and provide a personal service .. our goal is to be your partner! Plain and Simple.

Sounds good, right? Well, as along as you overlook the sketchy punctuation and some odd capitalization. But not so fast. There are some red flags here (and some much worse stuff as well, but I’ll get to that in a bit).

– No substantive info on the staff’s credentials. Albee’s “About Us” page provides some vague verbiage on the company’s founder, Mike Albee (and no one else), but doesn’t say what might actually have qualified Mike to start a PR agency. This is something you really need to know, because the Internet is awash in amateurs providing services that should only be delivered by professionals.

– Claims of success, but no examples. Supposedly Albee’s clients have appeared on all kinds of national media (as opposed to an AM radio show in Podunk, Iowa at 3:00 in the morning)–but there are no specific examples or sample campaigns on the website, so there’s no way to verify these claims.

– I smell spam. Albee’s “campaign examples” include a pretty standard mix of what I call “junk PR”: mass-mail style publicity (“We deliver your book announcement to 250,000 opt-in book news subscribers”–who are likely simply to hit the “delete” button, if their spam filters don’t snag it first), tasks you can easily do yourself (setting up Facebook and Twitter profiles–the mystique with which these things are often invested is really absurd), and activities that are of dubious value in marketing a book (SEO optimization).

This is all stuff that sounds good in theory (if you don’t know better, that is), delivers little in practice, and is a profit generator for the provider because it costs so little to implement. This is not to say that reputable PR firms don’t provide these kinds of services–they do. But they don’t rely on them primarily or exclusively.

Also, because the PR provider can make a nice chunk of money with a relatively small markup, junk PR can present a completely misleading semblance of cost-effectiveness. Although not in this case. No prices are mentioned on Albee’s website, but I’ve heard from clients that services run around $2,000 per month. Not exactly chump change.

When I’m researching a website, I always vet the testimonials, because they can be, you know, fake. The very first Albee testimonial I checked caused warning bells to ring. (I’m providing screenshots below, rather than links–partly because the Albee website cycles content, so you won’t necessarily get to the same page I did–and partly because I suspect the Albee website will shortly be changing.)

Take, for instance, this glowing praise from Amanda Keeling, author of Princess Story, Sheryl Reynolds, author of Free Admission, Stemphanie (no, that’s not a typo) Lambert, “New York Times Best Selling Author,” and Gene Sidow, author of Max Freeshot. Just one problem: I could find no evidence that either the authors or their books exist. 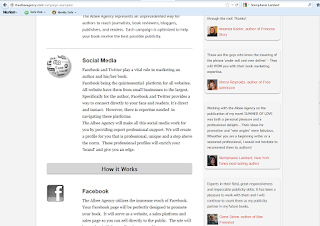 Now, these are all authors I’d never heard of before. Maybe their books never got published, or went out of print, or something. Maybe my Google-fu was just not up to par. But wait–here’s an author I do know: Chuck Wendig (if you’re not familiar with his blog, you should get to know it). Wow, Chuck really had a great experience with Albee, didn’t he? 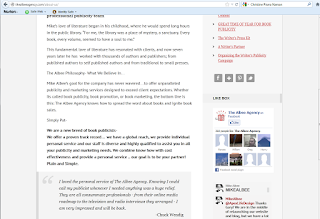 However, I have a suspicious mind. So I dropped Chuck a line, asking if he’d indeed hired The Albee Agency to do PR for him. His response:

WTF? Who is the Albee Agency? They have a testimonial from me on their main page that I never made. thealbeeagency.com (@victoriastrauss)
— Chuck Wendig (@ChuckWendig) December 6, 2012 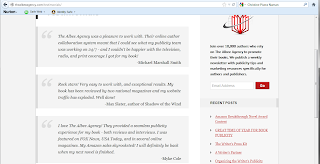 And author Maureen Johnson is SUCH a fan: 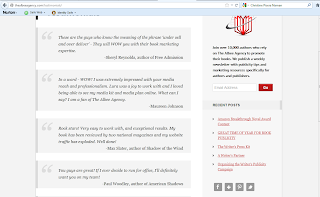 However, their testimonials are no more authentic:

.@mikealbee ‘s agency is falsely attributing a testimonial to me. I have never used the agency and never approved them using my name.
— Myke Cole (@MykeCole) December 6, 2012

I do not use that company. I will never use this company. And to my knowledge, this is a scam. PLEASE AVOID. thealbeeagency.com/testimonials/
— maureenjohnson (@maureenjohnson) December 6, 2012

I haven’t heard back yet from other authors I contacted, but I’m sure their response will be the same.

So….fake testimonials. Nonexistent authors; authors quoted without permission. There are no gray areas here: The Albee Agency is engaging in fraudulent behavior. This just emphasizes–as if y’all didn’t already know–that writers need to watch out for scams.

The bigger point, though, is that even without the fake testimonials, there is plenty to beware of here. If Albee were absolutely, scrupulously honest about the authors it has worked with, it would still be offering services of dubious value for too much money, with no assurance of professional expertise.

And that, my friends, is a much bigger danger these days than an outright, bona-fide scam.

(Note: I emailed Chuck Wendig just before 3:00 this afternoon. By around 5:30, when I’d finished and proofed this post–which took me some time because of screenshotting and double-checking–most of the fake testimonials had vanished from Albee’s website. The only testimonials that appear now are from Barry Krusch (who actually seems to exist) and “Suzie Plackson” (she seems to be real also, albeit with a different spelling.)