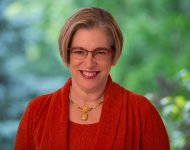 As a film professor who writes fantasy novels, you’d think that I’d be into fantasy films. But with some notable exceptions (Lord of the Rings! Pan’s Labyrinth!), I mostly haven’t responded to the fantasy films I’ve seen, so—shh! don’t tell anybody—I avoid the genre.

What I do love—inordinately—are movies that at first blush appear to be realistic dramas, but which, at key moments, spin-off into something rich and strange.

Fellini, of course, is the master of this technique. La Strada (1954) starts almost as neorealist film, but as it goes along Gelsomina’s holy innocence, matched by that of the Fool she meets at the circus, lifts the film into another plane. La Dolce Vita (1960) could be a journalistic expose of the rich and aimless amongst the Via Veneto, until we go to the nightclub where the solo, pathetic clown adds mystery, magic, and mortality. At the end we see the lovely young girl from the café trying to tell Marcello something:  we know she’s an angel, his last chance to turn away from his dissolute path, but he can’t hear her.

Speaking of angels, no one expects to find them in the rubble and graffiti of divided Berlin, pulling their hair back into short ponytails, and wearing woolen overcoats and long scarves. (I wore this in class the day I taught Wings of Desire, and I looked so “normal” my students didn’t grasp that I was in costume.) But in Wim Wenders’ film, with cinematography by Henri Alekan of Cocteau’s Beauty and the Beast, there they are, hanging out in the library, watching Berliners’ lives with patience and sympathy, falling in love with the most prosaic detail—coffee, chalk, a woman’s neck—and making us cherish these same details.

Magical moments also occur in Antonia’s Line (1995), Marlene Gorris’s story about four generations of Dutch women, each with artistic talent. Here the magic is linked to the artists’ sensitivities, so that Danielle sees a wooden church angel come to life and her dead grandmother sit up in her coffin to sing—I kid you not—“My Blue Heaven.” But most magical of all are the rhythms of the seasons in the countryside and the accepting community that Antonia creates in her farmhouse, a sanctuary for social outcasts. Sarah, her great-granddaughter, the writer, sees the courtyard as filled with so much love that it defeats time and death.

Walter Salles’ Central Station (1998) starts with Dora, a bitter, aging former schoolteacher who makes her living writing letters for illiterate travelers who come through Rio’s Central Station. Ana, a young woman, dictates a letter to her husband, Jesus, and then gets killed in a bus accident. Grudgingly, Dora takes charge of Ana’s nine-year-old son, Josué, and tries to take him to his father in the sertão. Only at the end does the story’s allegorical weight snap into focus: the “central station” is life on earth, and Josué and his half-brothers, Moises and Isaías, will wait for their Father, who has promised to return. This dusty road movie levitates into the stars a clever designer put on the poster.

Night of the Hunter (1955) is an oddity, the only film that Charles Laughton ever directed. It’s a film noir about money hidden from a bank robbery and an erstwhile prison cellmate who tries to find the loot stashed with the prisoner’s family. Except calling it a film noir hardly does justice to its evocative art direction or its fantastic elements: an evil preacher, perfectly played by Robert Mitchum, a mystical escape down a moon-dappled river watched by kind animals, a powerful old lady (Lillian Gish), who runs a makeshift orphanage. The noir trappings cover a tale as wondrous as any fairy tale.

In the films I’ve rhapsodized over here (and I have more up my sleeve), at unpredictable moments the fabric of everyday life tears, and the fantastic shines through, taking my breath away.

You can call this “magical realism” if you like, though the term (so associated with Latin American literature) is rarely used in film circles.

We’re supposed to read widely, exposing ourselves to new genres to spark our imagination. By the same token, shouldn’t we expand our viewing experiences?

Now, do you really want to watch another dysfunctional detective pursue another serial killer tonight?

Sarah Kozloff is the author of The Nine Realms, a four-volume epic fantasy being published by Tor from January-April 2020. She also holds the Wiliam R. Kenan Jr. Chair in the Department of Film at Vassar College. You can learn more about her at SarahKozloff.com or follow her on Twitter @sarah_kozloff.