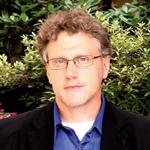 Prometheus is the most frightening horror movie of the past 20 years. And the horror is that this is what American science will look like after a century of teaching Creationism in our schools.

Why do I think it’s a movie about Creationism? Because as the character of Weyland subtly and repeatedly tells us, he’s spent trillions of dollars on science and scientists for one reason only: so that he can “meet my Maker.” And why does he pick Elizabeth Shaw to lead his mission? Because “he wants a true believer in charge.”

But hey, that sounds pretty flimsy when I put it like that, so let’s just look at the science.

Anthropology. I know! It’s scary enough just imagining that anyone in this movie could be called an anthropologist. But technically Charlie and Elizabeth have travelled around the world studying the origins of ancient civilizations, and in our time, at least, that would more or less qualify them as anthropologists. So what have they learned? “Hey, you aliens who made us — whyyyy do you hate us? What’s wrong with us huuuuuumans. We’re sooooooorry. We didn’t mean to make you maaaaaad!” That’s a lot more like anthro-apology. “Sorry, man. Sorry.” No wonder, these aliens want wipe us out of existence.

Biologist. The team biologist talks about “three centuries of Darwinism” as if it means anything. Just the idea that “Darwinism” could be used as a scientific term by someone claiming to be a scientist should give you the heebie-jeebies. But to top that, in the one instance in which his expertise is needed, he tries to pet an alien life form that looks and behaves a lot like a cobra and then acts all offended when it tries to kill him. So what qualifies him to be a biologist? He looks at an animal and calls it a “beauty.” Aw. Isn’t that sweet? In a fear-for-our-future kind of way.

Geologist. Approximately 80 years from now, the final exam to be a certified astro-geologist so elite you get recruited to participate on a major space voyage, consists of one question and one question only: Do you fucking love rocks? If you answered “Yes, I love rocks, I fucking love rocks” then congratulations, you are now a geologist! Which sucks for you because your total scientific expertise consists of throwing some mapping “puppies” in the air and howling at them like a wolf. And then you wander around in circles and get lost on your way out because even though you’re the guy in charge of making maps, you don’t know how to find the map on your computer and couldn’t read it if you did.

Medicine. Hahahahahahahahahahahaha! But no, seriously, let’s pretend that someone on this ship had medical training. Sterilization = burn it, burn it to death! Contagion-free = these living cells growing on this dead thing’s skull must be safe because they don’t look like an aggressive alien life form. First aid = sorry, woman, you’re out of luck, our medical pod has been preprogrammed only for men because the software is too primitive to treat both men and women. DON’T YOU KNOW THAT MEN AND WOMEN ARE DIFFERENT SPECIES GOD OH GOD OH GOD?!

Astronomy. Hey, look, it’s a new planet. We could circle it in space, send down a probe, create a map of potential landing sites from up here. Or we could dive blind into the atmosphere, aim for the biggest mountain, and then turn right. No, seriously. “Turn ship ninety degrees right.” Yeah, let’s do that.

Genetics. So a billion years ago, one of these Promethean aliens came to earth and turned itself into DNA soup to seed the whole planet with life. Fast forward hundreds of millions of years through single-cell organisms to flatworms to fish to dinosaurs to mammals to primates to humans. And the end result is? This alien DNA is a 100% match for human DNA! The computer even overlaps the samples so we can see them line up perfectly! Woo!! And all those intermediate stages of evolution? Hahaha. Dude, we’re just dicking with you.

But if you look beyond the specific sciences and the scientists at the scientific method, it’s just as horrific.

We just travelled billions of miles and many light years across space. It’s going to get dark in 6 hours, and we don’t know anything about the surface of the planet. Let’s wait overnight and approach this methodically in the morning? Hell no. It’s Christmas Day! I gotta go open up the Christmas presents baby Jesus brought me… RIGHT NOW!

Thomas Edison experimented with 200+ materials before he discovered the filament that would make a lightbulb work. But hey, my name is Charlie Holloway, and I travelled farther than any human ever has before, and since I didn’t find our Makers in the first structure we checked on the first planet we visited in the first six hours since we landed, it’s time to CALL THE WHOLE THING A FAILURE AND START DRINKING BECAUSE THIS IS JUST TOO HARD WHY DOES GOD HATE ME WHY IS MY WHOLE LIFE JUST A HOLLOW WAY WHY?!?

“Ooooh, cool, I’ve got an extra-terrestrial infection in my eye. It’s like having a really aggressive leech attached to my iris. But why should I tell anyone that or take any steps to isolate or treat it. Maybe if I just pretend it’s not here, it’ll go away. Oh, yeah, that’s a cool idea.”

Nah, we won’t put any behavioral limits on our robots. Why would we do that? They’re just robots. They would never hurt us. No, I’ve never read Isaac Asimov or seen the Terminator movies; reading makes my brain hurt. Plus there’s no God in these old science fiction books or movies, so I know the ideas aren’t worth thinking about.

You think that’s too harsh?

The catchphrase for Prometheus might as well be “Shaw, don’t tell.” 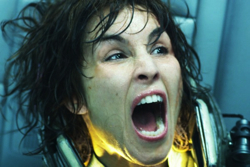 Elizabeth Shaw spouts the themes of the movie, embodies the themes of the movies, and makes the stupidest decisions of the movies. “Hey, this alien has been in stasis for 2000 years and the first thing he does when he wakes up is kill everyone he can get hold of and takes off in his spaceship full of biological weapons to wipe out Earth AND the last 3 people alive on our ship kamikaze his ship to stop them! You know what I should do? I should figure out how to go to the alien dude’s home planet. Yeah, that can’t turn out bad for anybody. Plus then maybe they’ll tell me WHY THEY’RE SO MEAN TO US OH GOD WHY ARE THEY SO MEAN?”

Elizabeth Shaw is the one who, when the giant wheel-shaped alien spaceship rolls toward her like a tire knocked off a stock car in a NASCAR accident, tries to outrun it straight ahead instead of turning to one side or the other.

We know that she’s the smartest and most virtuous scientist and the one who’s going to survive because she wears a cross and she says things like “I choose to believe” and she has faith and shit. And also, after the robot steals her cross and makes sure she has the evil alien baby in her STERILE STERILE WOMB BECAUSE GOD HATES HER she cuts out the alien baby and then we find out the alien baby didn’t die, so it wasn’t really an abortion, which is why she keeps referring to it as a C-section, and she feels sorry for the hungry alien baby so she takes it someone to eat. And then she makes the bad robot give her cross back to her.

Science can’t do everything — it can’t tell us why life is meaningful, That’s faith’s business. But it turns out faith is REALLY REALLY BAD at doing science like anthropology, geology, biology, medicine and all the rest. Science and religion don’t have to be in conflict. It’s not an either-or decision. Each has their own realm.

But if you choose Creationism, this is the either-or future you’re embracing.

Bad science. Bad decision-making. And possibly the death of the human species.

You think this isn’t horror?

Then you aren’t paying attention.

C.C. Finlay is the author of the Hugo- and Nebula-finalist novellas “The Political Officer” and “The Political Prisoner,” and of the Traitor To The Crown series of historical fantasy novels.  His most recent story is “The Cross-Time Accountants Fail To Kill Hitler Because Chuck Berry Does The Twist” in the May issue of Lightspeed magazine.  He’s married to YA novelist Rae Carson.