Susan Casper (b.1947) died on February 24 following a long illness. A member of SFWA throughout her life, her first published story was “Spring-Fingered Jack,” which appeared in the Charles L. Grant anthology, Fears in 1983.  Over the next twenty years, she continued to publish short fiction, usually alone, but occasionally in collaboration with her husband, editor Gardner Dozois (and once with Jack Dann).  Although many of her stories were dark or horror fiction, she could also write humor and had works appear in Esther Friesner’s, “Chicks in Chainmail” series.  With Dozois and Dann, Casper also edited the anthology Ripper! (a.k.a. Jack the Ripper) in 1988. 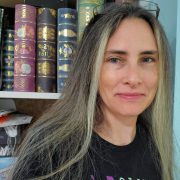 Adeena Mignogna, author of The Robot Galaxy series, is an engineer working in aerospace and a long-time science fiction geek with a strong desire to inspire others through speaking and writing about robots, AI, aliens, virtual reality, and more!