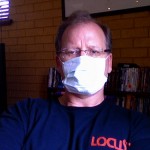 There is at least one confirmed possible case of H1N1 coming out of World Fantasy.  Australian editor, Jonathan Strahan, reports on his blog that he became ill immediately after the World Fantasy Convention and it has been diagnosed as the flu H1N1.

Please do note that there are no other confirmed cases at WFC, but given the incidence of con crud at a normal convention, it seems prudent to mention this.

For more information about H1N1, visit the Center for Disease Control. The CDC reports that the incubation period from exposure is 1-7 days, with 1-4 being most likely.

Edited to add: Jonathan let us know in comments that though his doctor diagnosed it as H1N1, he did not do clinical tests.  Let’s hope that it is not.