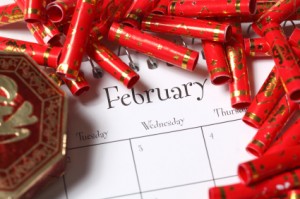 Around the world people are celebrating February 14, 2010 as a special day. What, exactly, that special day is depends on who you are and what tradition you grew up in.  For much of the U.S. today is Valentines Day, a day of love and romance, but it is also Chinese New Year as well as The Fourth Sunday of the Triodion Period: Sunday of Forgiveness or Cheesefare Sunday in the Orthodox Calendar.  Rabi’ al-awwal, the third month of the Islamic calendar begins at sundown and on the Catholic calendar today is Shrovetide or Carnival.

All of these dates are on different calendars and in many places there are people who live their lives with two divisions of time running concurrently. When world-building in fantasy or science fiction keep in mind that not everyone will divide the year up in the same way.  Don’t limit your world by just modifying the calendar you grew up with but look at all the other ways of dividing a year.

If you have a city where cultures meet, those calendars will meet as well. The children of multiple cultures will live with the holidays of both and inevitably at some point those calendars give you the opportunity to create a conflict. Think I’m exaggerating?

Did you know that Napoleon won the Battle of Austerlitz because of a calendar?  The Allied forces came up with a battle plan that called for the Russians arriving on October 20th.  They forgot that the plans were drawn up with the Julian calendar and that the Russians used the older Gregorian calendar. In 1805 that meant a twelve-day difference in dates so the Russians did not arrive until November 1st, long after the Austrians had surrendered.

Even if you don’t have a plot point hinging on differing calendars creating a world with different traditions of counting the days makes your story-telling richer.

I wish you a Happy Today, however you count it.