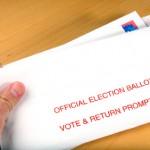 The Election Committee gathered on April 24th, 2010 to open, verify, and tabulate ballots for the election. 305 ballots were received by the deadline. 44 of these were discarded because they lacked their required coversheets. Of the remaining ballots, 261 were from Eastern and Western Regions, 94 from the South/Central Region, 4 from Canada, and 10 from Overseas.

On behalf of the committee, the Election Officer expresses gratitude for all those who stepped up and put their names on the ballot, and appreciation to all who voted.