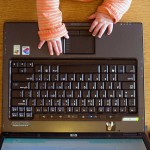 I don’t have children, myself (yet?); I have cats. Demanding, finicky, self-centered, hilarious, brilliant cats. They climb into my lap when I am trying to meet deadlines, mewl furiously when I don’t look up from my keyboard to give them attention, treats or clean the litter box that very instant.

When I consider trying to maintain my writing and care for human children, my head boggles.

Others have done it, wresting time and space while caring for family. I decided to ask a small panel of talented writers and fellow SFWA members about how they did it. The answers I got were honest, terrifying and instructive. Future parents, read and heed the hard-won wisdom. Current moms and dads: shake your heads in commiserating validation (or leave comments about your own experience).

The SFWA parents I spoke with included:
Mishell Baker is a graduate of the 2009 Clarion Fantasy & Science Fiction Writers’ Workshop and now administers the workshop’s official blog at http://clarionfoundation.wordpress.com .  She has been published in Beneath Ceaseless Skies and keeps a personal blog at http://mishellbaker.wordpress.com.

Harry Connolly‘s first novel, Child of Fire, was released by Del Rey last year and was listed on Publishers Weekly’s Best 100 Books of 2009. His second novel, Game of Cages, comes out on August 31st of this year.  Visit Harry at www.harryjconnolly.com.

Sandra M. Odell is a happily married, 42 year old mother of two, an avid reader, compulsive writer, and rabid chocoholic.  Her writing credits include publication in Jim Baen’s UNIVERSE, Brain Harvest, and Ideomancer among others, four honorable mentions from the L. Ron Hubbard’s Writers of the Future Contest. She is a Clarion West 2010 graduate.  You can find her online at http://sandramodell.com.

Michelle Sagara writes under her own name for Luna and as Michelle West for DAW, but her first four books have been reprinted by BenBella Books as byline “Michelle Sagara West”. However, she is all the same person, and can be found as @msagara on twitter and at msagara.livejournal.com and msagarawest.wordpress.com.

Catherine Shaffer wears two hats: freelance science writer and science fiction writer. Her background is in biochemistry and pharmaceutical research, and she Attended Clarion in 1997 to learn the ropes. She’s published a number of short stories since then and have been poking at her first novel for many years.

Finding time to write, especially at home, is a common issue for parents. Did you encounter this? If so, how did you work in your writing time?
MB: I used to dive into writing obsessively.  I would disappear into a novel for two weeks at a stretch, barely coming up to eat or shower, consumed by inspiration, and not stop until I got it all out.  The down side is that I then often wouldn’t write a word for months.
My current schedule leaves me always unsatisfied, wanting more.  I long for my characters while I push a stroller up and down the sidewalk.  I puzzle out plot problems while washing out bottles in the sink.  So by the time I get that precious two- to three-hour window of writing time, I am ready to put it to good use.  I am wrenched back to the real world before I’m quite ready to stop writing, and so interestingly, it prevents me from burning myself out the way I used to.  On the whole, my output is actually much greater than it was when I had less to do.

SO: It was difficult to find time to write at home, not only because I have children but that my youngest son has a number of specific care needs resulting from his diagnosis of Cri-du-Chat.  I am very fortunate to have a husband who supports my writing by encouraging me to go to the local community library at least three afternoons a week so I can write without being disturbed.  I also write late at night when everyone else is asleep.

MS: <cue hysterical laughter>.  When I was pregnant with my oldest son, I told my writer friends that I’d write at home, because I was mostly writing novels on my lunch hour at the bookstore, and how hard could it be to find an hour or two?  They all laughed.  Hysterically, mind.
So, yes, absolutely.
I took three months off when my oldest was born–which was good because he didn’t discover sleeping at night until he had all of his teeth.
However, because I’d been so optimistic about “finding a spare hour”, I was in a position where a deadline was looming and I couldn’t take any more time off than that.  My son could be guaranteed, at this point, to sleep between the hours of 2 and 5 — in the morning.
So, that’s when I wrote.  I honestly do not recommend this.
When that book was done, though, I would wake up early with my husband; he would take the baby, and I would write for an hour and a half before he had to leave to go to work.  That worked better.

Did you find your writing habits changed when you became a parent? >If so, how? For better or worse?
HC: My habits had to become better, because I had so much less time for everything.  Where I used to let my thoughts meander (and would occasionally goof off with a book, TV or website) when I became a father I had to become strict with myself.
That said, there were days it didn’t happen, especially in that first year.  Sometimes that’s the way it’s got to be, and I had to learn to let it go.

MS:  I was vastly more desperate, so I think my use of the actual writing time was more efficient–it had to be, I was getting so little of it.
But I had to block time when my husband could take the baby in order to get the work done.  I didn’t email.  I didn’t web-surf.  I didn’t do *anything* but write during that time.  I didn’t fritter the minutes away because I simply didn’t have them.

For many writers, getting into the work requires a type of disengagement from the every day into the work. Being a parent doesn’t always allow that. Did you find yourself learning new ways to “transition” into work? If so, what were they?
HC: All I need for that transition is the time to write, something to write with (or on) and the willingness to do it.  Years ago, I had all sorts of little rituals before starting to write, and I’d convinced myself I needed certain types of music and a special pen, tablet, chair, and desk.
But even before my son was born, life conspired to take all that away, one thing at a time. I lost the chair, the privacy, the music, the pens… everything.  Eventually I realized that I didn’t need anything to write except myself, and those external cues were actually crutches.
Now I can work pretty much anywhere.  The only sounds I can’t tune out are my wife’s voice, my son’s voice, and (sadly) the “new email” chime.

SO: Getting out of the house to write whenever possible.  It’s too easy to fall into the “this needs doing” trap of housework and childcare at home, so I gave myself permission to work in an environment where writing is my only focus.  I felt incredibly guilty about this at first, bludgeoning myself with words like selfish and neglectful, but now I recognize that both my writing and my family are better served by my library time.  And for those days when going to the library is not an option, I do my best to focus on what writing I can manage and smile through the rest of the day.

How did you successfully (or unsuccessfully) manage your energy and motivation levels while you juggle/d family and writing?
HC: My energy and motivation flagged when my son was an infant, certainly.  It’s tough to be creative when you haven’t had enough sleep.  One of the things that helped in the first few years was that my wife and I arranged our schedules so we would both be home a lot. She had a terrific part-time job and I was the stay-at-home parent. That let us cover for each other when we were exhausted or sick.

MB: Energy, I still haven’t learned to manage.  I’ve just learned to work despite not having any.  As for motivation, nothing motivates me to write more than parenthood.  It’s not just about the hope of earning money and making a life for my daughter; it’s also about being the person I want my daughter to see.  Children don’t listen when you lecture them about perseverance, about living up to their potential.  What they do is watch you, very closely.  I am deeply motivated to become someone that is worthy of my daughter’s emulation and respect.

CS: Well, I would go with unsuccessfully, by and large. I have pretty consistently failed to have enough energy for parenting, fiction writing, freelance writing, and other obligations in my life. I know this time will eventually pass. I try to practice patience, deferred gratification, and appropriate self-care including plenty of sleep and exercise.

What advice would you give to writers who are just about to become parents?
MB: You can’t create “low-maintenance” children by forcing independence on them before they’re ready – quite the opposite, in fact.  Children don’t want your attention; they need it, and will find very unpleasant ways to get it if you don’t give it freely.  So go ahead and neglect your writing a bit at first, if you need to, while your children are small.  It will pay off tenfold when they are older.

HC: Speaking from my personal experience, I would say this: Be prepared to give up the things you enjoy, especially for the first few years. I’m not saying new parents who write can’t attend their weekly gaming night, or follow their favorite TV shows.  Some can.  But just be ready to mark certain items on your schedule as expendable.

MS: Plan for six months off.  Having a baby was sooo much more work than writing a novel, for me; it made the writing look easy in comparison.
It’s hard to be the parent at home with the small child *and* get anything else done in the first few months; you really do not need to be castigating either yourself or your infant for the failure to produce new words.
I think we’re all terrified of missing a chance, of being left behind. Having a small child is already isolating, or it can be if you’re not careful; you’re also sleep deprived and your whole world has been irrevocably changed.
Understand that the six months will not sink your career.  That it’s a blip in time and in a decade, you won’t remember it clearly (probably because of the sleep deprivation).

CS: Most expectant parents do not have realistic expectations of what their lives will be like after their child comes. It is a good idea to detach from those expectations a bit and be open to any and all kinds of experience. When you are having a new child is not the time to set overly-ambitious goals. It is a time to hunker down and appreciate the small pleasures. Your writing will most likely take a back seat for a while, but it’s not forever. 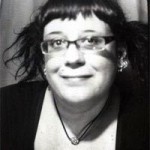 Caren Gussoff  is a science fantasy writer living in Seattle, and acting pro tem web editor for SFWA. You can read more about her, her publications and her cats at spitkitten.com.