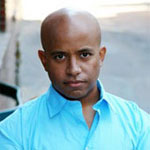 Minister Faust is the nom de guerre of Malcolm Azania, an acclaimed African-Canadian activist and radio personality, and the author of Coyote Kings of the Space-Age Bachelor Pad and From the Notebooks of Dr. Brain. Both novels were Philip K. Dick Award nominees; the second received the Carl Brandon Society’s Parallax Award. Faust is currently working on The Alchemists of Kush, “the story of two Sudanese boys orphaned by war and forced to wander through violence, fear, and deprivation, until they encounter mystic mentors who try to transform them into leaders. One of those boys lives today in inner-city Edmonton. The other lived 7,000 years ago: Horus, son of Osiris.”

You’re a radio announcer and a spoken word artist, the former member of a hip hop group, and an acclaimed participant in live poetry readings. How does performance influence your written work?

I can’t stress enough how important it is for writers to read their own work aloud to themselves. One of the most helpful lessons I’ve learned from doing so much performance (which also includes giving scores of speeches and having taught public school for ten years) is how to be clear and concise.

When we write, it’s easy to get carried away, to fall in love with our own endless descriptions of whatever we personally think is amazing: sunsets, flowers, action, aliens, guns, food, sex, shoes…. But when you read your work aloud and discover you’ve spent five minutes on something, no matter how pretty the words are you have to realize you’ve gone long.

Another major benefit of that much experience speaking and performing is that I aim for naturalistic phrasing. I get irked by passages such as, “I stand at the waterfall. I gaze out at the mountains,” since in real life, a native English speaker would say, “I’m standing at the waterfall, looking out at the mountains.” Why choose a bizarre, distancing, formal phrase when a down-to-earth one is so convenient and immediate? I recommend to all young writers, whether it’s dialogue or narration, to write like people actually speak.

And if you have a character who speaks in a truly formal fashion, even in narration, then draw attention to that, since such behavior points to a strange personality or frame of mind.

The absence of women on my list points to a major flaw in my early reading history, when a writer was much more likely to influence my own approach. But I’d definitely say I’m profoundly impressed by Nalo Hopkinson (Brown Girl in the Ring), Eden Robinson (Traplines), Hiromi Goto (The Kappa Child), Danzy Senna (Caucasia), Laura Esquivel (Like Water for Chocolate), and Jan Wong (Red China Blues).

As a writer you set yourself daily goals of hundreds, sometimes thousands of words. Do you revise as you go?

When I’m working on a novel manuscript, I try to write a minimum of four pages a day (2,000 words). Revising can be a helpful way to get the momentum to do the day’s work, but for me, revising at that stage is mostly proofreading with minor additions and subtractions. Some people are quite comfortable killing whole sections of a manuscript in progress, but I grieve losses on that scale.

To avoid having to delete large sections, I do extensive planning for every novel manuscript. My notes for my unpublished megabooks sometimes total a few hundred pages. They’re at least 100 pages for my latest manuscript, The Alchemists of Kush, which when published will be about 350 pages long.

Not everyone likes extensive planning, and Stephen King says it’s for hacks. Writing is not a performance art, though—it’s a results-oriented art. The only people who truly care how you wrote your book are certain types of fans, and writers seeking to learn from your methods. All television writers and most film writers do extensive planning; a story might be up to half the length of the finished script.

What’s good about writing for games? What’s not so great about it?

The most satisfying part of writing for video games is seeing artists and level designers turn my ideas into visuals. For ten years (ages 10 – 20), I aimed at being a comic book artist and writer, so seeing people put in hours and years to bring my ideas to simulated 3D life is deeply rewarding.

The part that’s not so great is, ironically, also the most valuable: having my work constantly subjected to many, many people’s changes. It’s hard to take because it means that whatever I love can be (and most of the time is) killed almost immediately. That’s beneficial because I’ve learned a great deal about what “average folks” either are entertained by or think they’ll be entertained by. So lessons from writing for video games will be useful in some of the YA series I’m planning right now.

You’ve described yourself as “Kenyan-Canadian left-wing writer.” Can readers perceive your politics through your work? Do you think your writing can achieve political gains?

If readers don’t perceive my politics, they aren’t paying much attention. That said, some people think they know my convictions and proceed to make a variety of claims about them. They’re frequently speaking more about their own fears and prejudices than anything having to do with me.

As far as political gains, I think that barring a few people—such as Ralph Nader, whose books have brought major improvements to the lives of hundreds of millions of his fellow citizens—the best most writers can hope for is to make a lot of people feel less alone (because someone, somewhere has shared their experiences and published them), and to inspire a few ambitious people to turn fictional versions of aspects of a better life into reality.

You mentioned in an interview a few years back that Canadian SF writer Robert Sawyer predicted the death of SF publishing within our lifetimes. Do you believe that will happen? Do you see SF as a ghetto to escape from?

I think SF publishing for adults is in a tough spot right now based on what various people tell me. The best hope for SF adult publishing is SF YA publishing, which apparently outsells adult SF by a ratio of two-to-one. The more young people we can bring into SF, the more will become adults who continue to read in the genre. And many of them will become literature teachers and professors who will assign SF novels.

SF isn’t a “bad neighborhood” from which to escape; some of the finest novels in English are SF: Jonathan Swift’s Gulliver’s Travels, really the earliest Star Trek, exploring strange new worlds and seeking out new lifeforms and new civilizations, complete with political commentary; George Orwell’s 1984; Philip K. Dick’s VALIS. Our biggest barrier is the prejudice of people who think they’re too good for SF.

Do you have any advice for 2011 Clarion West students on how to approach the week they’ll be spending with you next summer?

Be open. Together we’ll try to help everyone improve their weakest skills and investigate their own deepest fears, pains, hopes, and joys, which I believe are the sources of our greatest writing.

If you could go back in time and tell your younger self anything, what would it be? 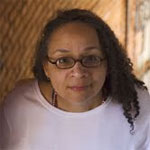 Nisi Shawl received a 2008 James Tiptree, Jr. Award and two World Fantasy Award nominations for her story collection Filter House. She is the coauthor of Writing the Other: A Practical Approach, a founding member of the Carl Brandon Society, and serves on Clarion West’s Board of Directors. She’ll be the Guest of Honor at WisCon 35 in May, 2011. Her blog is fairly active, and she has been meaning to update her homepage.