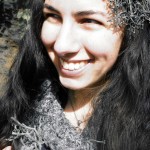 Amal El-Mohtar is a Canadian-born child of the Mediterranean, currently pursuing a PhD in English literature at the Cornwall campus of the University of Exeter. She is the author of The Honey Month, a collection of spontaneous poetry and prose written to the taste of twenty-eight different kinds of honey, and co-editor of Goblin Fruit, an online quarterly dedicated to fantastical poetry. Her work has appeared in Strange Horizons, Apex, Cabinet des Fées, and Shimmer, and is forthcoming in Welcome to Bordertown and The Thackeray T. Lambshead Cabinet of Curiosities. She is the recipient of the 2009 Rhysling Award for Best Short Poem, and her short story “The Green Book” has been nominated for a Nebula Award.

Read more of her ramblings on either her website or her Livejournal.

I happen to know who you are, and how awesome you are. Many people don’t. How would you like to introduce yourself to all of the peoples of the internet?

You are too kind! I think if the Peoples of the Internet were arrayed before me I would probably try to find something more important to say than an introduction. GO FORTH AND READ HOMESTUCK would about sum it up, I think. But having said that, I suppose I’d follow it up with Hi! My name is Amal. I’m a writer, editor, harpist, doctoral student, and geek-of-many-fandoms. Amongst which most recently is Homestuck. You guys, read Homestuck. Seriously.

It actually wasn’t any of the above! Inspiration was drawn from an actual, physical green book that I picked up from a craft store on Sparks street in Ottawa, as a birthday gift for author Nicole Kornher-Stace. The green of it made me think of her, and I decided I wanted to send it to her with a story inside. A great deal of what is written in the story — how compelling, how “chanty” is the Green Book — very much mirrors my own experience of picking up this beautiful object and wanting to write something in it.

More than that, I wanted to send it to Nicole not as a journal with a story in it, but as an artifact, as something that was part-puzzle, that contained ink-blots and different hand-writing and may very well have come from a world drawn slant of ours.

So, one thing that stood out to me about your Nebula Nominated story, “The Green Book” was how it was an speculative concept familiar from science fiction that had found a new home in fantasy. Were you aware of this connection? Did you seek inspiration from any science fiction sources, or do you suspect they found inspiration in something fantastic or folkloric?

It’s only reflecting on it now that I can see connections to posthumanism and discussions of the Singularity. Forget uploading! Just spill your heart’s blood over an ancient, spell-ridden text and you’ll be posthuman in no time! But no, I really wasn’t thinking of SF while writing the story. I am often fascinated by the process of bodies becoming things which they were not initially; The Honey Month is full of stories and poems where the colour of people’s skin and the scent of their hair becomes food for the bees, or where the dawn becomes bread, or where flesh becomes salt.

I do personally think of SF as under the umbrella of the fantastic, actually, and don’t like to set them up as mutually exclusive categories in which stories can or can’t be told. I think a really fascinating paper could be written comparing posthumanism in fantasy — where people have been maintaining human consciousness in non-human bodies since before Ovid — to posthumanism in SF, since in the former it’s so often a curse, whereas in the latter it’s often something to aspire towards.

You’ve been busy publishing lots of things on the internet. For instance, Goblin Fruit, is up to lucky issue #21. You’ve been publishing poetry in magazines both on-line and in-print for quite a while, and even won a Rhysling Award. Now you have a full book out with the Honey Month. What do you see as the big advantages and disadvantages to all these different formats?

I’ve found a disadvantage to online publishing to be that there’s a certain mindset out there that says if it isn’t printed, it wasn’t deemed worth the cost of having it printed, as well as a difficulty in monetizing online projects where people have developed an entitlement to things-on-the-internet-being-free. A disadvantage to print publishing is that it takes more time and more money to get a product out there, with no guarantee that people will buy the thing that you DID think worth the cost of being printed.

I love the crafty, tactile method you used to compose “The Green Book.” What would you do to make all publishing everywhere more tactile, if you had the power?

That’s such an interesting question. I think it’s already happening, really; given the convenience of e-books, there are truly beautiful things being done with books to make them more recognizable as art-objects in themselves. Erzebet YellowBoy makes books that are art; the Interstitial Arts Foundation is also doing tremendous work where blurring genre boundaries is concerned, finding different, more tactile and collaborative means of telling stories. So I guess I’d just try to make people more aware of the possibilities; I’m not sure I feel I know the publishing industry well enough otherwise to actually DO stuff proscriptively.

Thanks to Amal El-Mohtar for her patience! Go forth, people of the internet, and read “The Green Book”! Read Goblin Fruit!

J. M. McDermott is a robot that lives on fiction and caffeine somewhere east of Atlanta.