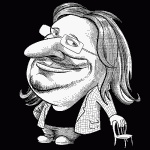 Barry Deutsch is a cartoonist, best known for his graphic novel Hereville, about yet another troll-fighting 11-year-old Orthodox Jewish girl. Hereville is the winner of the 2011 Sydney Taylor Book Award (the first time a graphic novel has won the award). Deutsch is also an award-winning political cartoonist.

Deutsch lives in a bright blue house with pink trim in Portland, Oregon. He’s currently working on a sequel to Hereville.

It’s a cliche, but given it’s such an unusual book, I have to ask, where did the idea for Hereville: how Mirka got her sword come from?

I think there are bits and pieces of Mirka in some of the earlier comics I began and abandoned — I’ve always loved reading and writing about tough girls, and I’ve always written fantasy. I also read Liz Harris’ book Holy Days, about the home lives of Hasidic Jews, sometime in the 1990s, and that obviously really stuck with me.

But basically, I have no idea where the idea came from. My friend Jenn Lee (who creates the best science fiction webcomic out there, “Dicebox”) had told me that Girlamatic.com, a website specializing in girl-friendly comics, was accepting submissions. With just a few days to go before the deadline, I sat down and started drawing page one, having no idea where I was going. And what came out was Hereville.

Hereville is the first graphic novel to ever make the Andre Norton Award shortlist – how does this make you feel?

Mainly, it makes me feel extremely honored. And delighted. And very surprised!

To follow on from that (probably!), does it feel a bit strange being up against seven text-only novels?

Well, Hereville also competed against prose novels for the Sydney Taylor Book Award (the first comic book ever to win), and for School Library Journal’s Battle of the Books (where Hereville lost on the very first round!). So it’s a strangeness I’m lucky enough to be getting used to.

What’s special about the Norton shortlist is the company I’m in! I’m a lifelong reader of sf and fantasy, so seeing my work on the same list as Paolo Bacigalupi, Holly Black, Scott Westerfield, and others — Terry Pratchett, for God’s sake! Terry Freaking Pratchett! No matter what happens, just being included on this list is a wonderful win for me.

What’s coming up next from you?

I’m thrilled to say that Abrams, my wonderful publisher, has signed me up to do two more Hereville graphic novels. 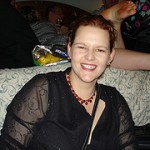 Tehani Wessely was a founding member of Andromeda Spaceways Inflight Magazine in 2001. Now firmly entrenched in Australian speculative fiction and small press, she has edited for Twelfth Planet Press (among other duties), judges for the Aurealis Awards, reads far more in one genre than is healthy, and writes reviews, non-fiction and interviews for ASif!, Fiction Focus and Magpies. In her spare moments, she works as a Teacher Librarian and enjoys her husband and three children.

Tehani is the editor of ASIM #4, #16, #27, #31 and #37, three Best Of ASIM e-anthologies, co-editor of ASIM #36, the Twelfth Planet Press anthology New Ceres Nights and other projects. She is currently working on an anthology of children’s stories titled Worlds Next Door, and a reprint anthology of Australian alternate mythologies from her own press, FableCroft Publishing.