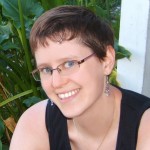 Vylar Kaftan writes speculative fiction of all genres, including science fiction, fantasy, horror, and slipstream. She was nominated for a 2010 Nebula Award for her short story “I’m Alive, I Love You, I’ll See You in Reno.” Her stories have appeared in Lightspeed, Strange Horizons, ChiZine, and Clarkesworld. Her work has been reprinted in Horror: The Best of the Year, honorably mentioned in The Year’s Best Fantasy and Horror, and shortlisted for the WSFA Small Press Award.

A graduate of Clarion West, she’s volunteered for that group as well as the Little Owls mentoring program for young writers. She’s a member of SFWA, Codex, Broad Universe, and the Carl Brandon Society. In 2011, she founded FOGcon, a new literary-themed science fiction and fantasy convention in the San Francisco Bay Area.

She lives with her husband Shannon in northern California. Her hobbies include modern-day temple dancing and preparing for a major earthquake. Her favorite color is all of them. She prefers the term “differently sane.”  Author’s photo by Devin Crain

Hello Vylar. Congratulations on your Nebula nomination for “I’m Alive, I Love You, I’ll See You in Reno.” Tell us a little about  the idea behind the story and how it came together for you.

I live in northern California, where earthquakes are common.  My husband and I designed an emergency plan in case of major quake or zombie apocalypse.  If we’re separated during a disaster, the plan is to get out of the Bay Area however we can (hitchhiking, walking, or riding a zombie-driven chariot).  We’ll meet up in Reno.

In a disaster, I might have only seconds of phone connection to leave a message, and therefore I’d need to be efficient.  I chose my phrase, and it sounded like a story title.  I wrote down the title, knowing at some point I’d have the story to go with it.

The story features juxtapositions of  literary form and speculative substance. Can you tell us why you decided on this structure?

I wrote the story the way I wanted it to sound: rhythmic and circular, like a moon and a planet orbiting each other.  I wanted the sound of two lovers and their changing lives, both together and apart.

What was your reaction upon learning of your Nebula nomination?

You went up against some pretty stiff competition.  Could you say a few words about the other stories?

It was a great year for short story nominees.  I think any of the seven stories would have been a good choice.  Each one had a unique strength and appeal.

As a side note, I offered to arm wrestle the other nominees for the award.  Then I heard Kij Johnson is a rock climber, so I thought maybe I’d better get in shape first.

What sparked your interest in physics and have you formally studied the subject?

Physics is just plain weird.  Where else do you get cats that are both dead and alive?  How do we know that the entire universe isn’t inside a black hole?  (Hint: it could be, and we have no way to know!)  If you think too hard about some of the stuff we’re discovering, it sounds like magic.  And that’s what I love: the idea that magic is simply science we don’t yet understand.

What are you working on right now?

Do you have any notable projects we should be looking for in the next year or two?

Lightspeed just published me again with “The Sighted Watchmaker.”

Also, I’m still chairing FOGcon, the new literary sf/f convention in the San Francisco area, so that takes up a lot of time in March.