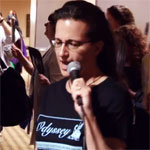 Sometimes craziness calls, and sometimes one must answer the call.

The Odyssey Writing Workshops Charitable Trust held its first flashmob last weekend at WorldCon 2012/Chicon 7. Graduates of Odyssey’s workshop and online classes, guest lecturers, and supporters all participated to help raise awareness of Odyssey and the programs we offer to help writers of fantasy, science fiction, and horror improve their work.

When I first heard that many nonprofit organizations were holding flashmobs to raise awareness of their activities, I realized this would be a great idea for Odyssey. I also had an idea of what we might do: the Tom Bombadil Rap. Years before, when I was reading The Lord of the Rings aloud to my husband, I had discovered that it much easier to get through the long passages of Tom Bombadil’s poetry by rapping them. Later, I set the rap to music (“Hip Hop Hooray” by Naughty by Nature). I was forced into performing the rap, in private, when I lost a bet (tip: never bet anyone that you will finish writing a novel by a specific date).

I can’t say that I dove into this without trepidation. Rapping in private is one thing; rapping at WorldCon is another. As my mother will happily tell you, I was too shy to order my own hamburger at McDonald’s until I graduated high school. And in college, I sat silently through all of my classes, sweating in the fear that the teacher would call on me. But at some point along the way, I realized that I make a fool of myself nearly every day, so why fight it?

When I first contacted people about participating, many of them were understandably anxious. A flashmob? Rapping and dancing? These were writers, not performers. Was this a disaster waiting to happen? Yet they agreed to participate to support Odyssey.

When they arrived at our rehearsal (yes, most flashmobs are carefully rehearsed, despite what you might think), they laughed nervously, eyes darting toward the exit. But as they received their Frodos-on-a-Stick, they began to get excited (who wouldn’t be excited by Elijah Wood on a stick?). And as the rehearsal progressed, the laughter became genuine, and participants threw themselves into the routine with enthusiasm and abandon.

At the actual flashmob, everyone’s willingness to go for it and have fun made it a wild and wonderful experience.

I think I’m hooked now. I’m looking at the convention calendar, considering other possible venues, and wondering when we can do it again. After all, flashmobs can happen anytime, anywhere.

So beware, as you head to the dealer’s room, or go to the mall, or head down the hall to brush your teeth.

Sometimes craziness calls, and sometimes one must answer the call.

If you’d like to be alerted about our next flashmob, sign up for Odyssey’s free e-newsletter by contacting me at jcavelos@sff.net 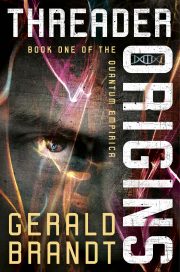