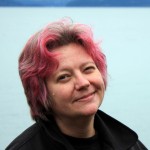 Writer, teacher, editor: if it has to do with words, Cat Rambo‘s done it. A Clarion West grad, Cat’s been published in Asimov’s, Weird Tales, Clarkesworld, and Strange Horizons, and her work has consistently garnered mentions and appearances in year’s best of anthologies. Her just-released third book-length work, Near + Far, collects her most recent science fiction stories. You can learn more about her at http://www.kittywumpus.net.

You have a new collection out. Can you tell us a little about it?

The collection, Near + Far, has been released by Seattle-based publishing company Hydra House Books. It’s all SF, divided into two sections, near future and far future, which we’re presenting in a form reminiscent of the old Ace Doubles. There are so many cool things about the book, from the nifty layout by Vicki Saunders to the interior art by mark Tripp. I’m really enthused about the collection, and we’ve put together some neat promotional items to go with it, including jewelry making use of the interior art and audio versions of the stories voice by myself, Folly Blaine, and my brother Eric Francis.

You’ve become a guru, of sorts, for other writers trying to use the Internet effectively. Any quick tips you’d be willing to share about establishing an online presence?

Well, the writing always comes first, since if you don’t do that, you have nothing to promote. That said, I’ve got several tips.

2.    Don’t be selling all the time. As a rule of thumb only one out of five tweets should be self-promotional. What else can you do with those other four tweets? One good use is being a good citizen and promoting other worthy work. Another is to be entertaining or informative. Give people a reason to follow you on social networks.

3.    Be pleasant and professional. Sure, there are folks who’ve made their reps being curmudgeons, but I’ve found that such behavior often bites them in the butt. Remember that what’s said on the Internet sticks around.

You’ve been busy as an editor, as well. Do you find that editing other writer’s work helps you with your own work? Why or why not?

I’ve found that editing other writers’ work often forces me to articulate my philosophy of writing, which helps me then turn around and apply it to my own. When you’re telling people to avoid adverbs, for instance, it’s worthwhile to go look at your own and see how many you have of your own.

What are 3 books you just recently read and would recommend?

I have been reading Mark Twain’s autobiography with great delight. There’s plenty of writing advice in there as well as lots of interesting historical detail and some background to his works.

Another is Chuck Palahniuk’s Invisible Monsters. I was lucky enough to hear him read lately and in between pieces, he dispensed useful advice. After looking at IM to see how he’d used a particular strategy he’d talked about, I ended up using it myself in a short space opera piece I wrote.

Finally, I just devoured the first two of Joe Lansdale’s Hap and Leonard novels and am looking forward to the rest with relish (I’m saving them for a long flight that’s coming up). Lansdale is a prose master, and I kept hitting sentences that make me happy because they’re just so goddamn wonderful.

What’s next for you?

I’m rewriting a fantasy novel at the moment and trying to make it into something other than the big sprawling 125,000 word mess it’s grown into. It’s my attempt at a “city novel,” one where the city itself is a character, and it’s tough and tricky but delightfully fun. Luckily someone pointed out to me that one of the characters represents the city very well, and so I’m trying to pull her story forward while not losing the background ones. 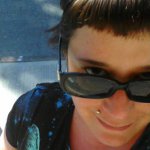 Science fiction writer Caren Gussoff lives in the Pacific Northwest with two cats and an artist. She’s trying to sell her third novel, a post-pandemic apocalyptic little story that actually has a car chase. Publications, awards and mutterings are available at www.spitkitten.com.