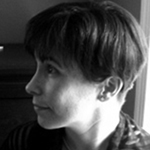 What’s on the menu in your favorite new read?

If you’re reading a book by Elizabeth Bear, you’re likely to come across a well-provisioned table, or two.

Bear, the award-winning science fiction and fantasy author and purveyor of the delicious salt caramels currently gracing my desk, knows that food and cooking are key to worldbuilding. In many of her 23 novels, you’ll find reference to, if not outright instructions for, how a particular culture feeds itself.

This is true for her novel Range of Ghosts, although some of the meals are not for the faint of heart.

“Marmot, for instance,” says Bear.  But we’ll get to that in a moment.

For now, you should know that there is a lot of food inRange of Ghosts, a novel that chronicles the adventures of Temur, heir-in-exile to the Khaganate, and Once-Princess Samarkar, former heir to the Rasan Empire.

Can you tell us a little about how and why food works itself into your writing?

Awareness of food in narratives may be related to my reading a lot of Nancy Drew books as a kid.  There’s something impressive about those fancy lunches, which are in most of the books.  All of those always involved a description of desert.  I may have fixated on that early.

Also, my agent [ed.: Jennifer Jackson] is notorious for being very fond of food in a story.  She’s a cook and a bit of a foodie.  If you don’t put enough food in the book, she’ll send it back to you and say, “This needs more food.”

So what is the food like in Range of Ghosts?

My favorite food in Range of Ghosts is a Mongolian recipe for whole marmot.

Cooking a marmot goes something like this: ‘First, catch marmot.  Skin marmot and remove meat from the carcass.  Then put the edible offal and meat back inside the skin and sew the skin shut.’ In modern Mongolia, they sew the skin shut with wire.  A hundred years ago, they would have used some sort of twine or tendons.  Then you take a blowtorch or acetylene torch, and blowtorch it until it’s crispy and blackened.  You have marmot stewed a la blowtorch – you serve up the insides.  In Range of Ghosts, they bury it in the coals of their fire to cook it.

When I’m doing research for a story, there’s that moment in the research when I stumble across something so completely wonderful – I remember coming across this marmot cooking technique, and I knew that I had to put it into the story, as long as it didn’t distract from the narrative.

According to the researcher who experienced the marmot, it’s exceptionally tough, but the most delicious meat they have ever had.

What else do your characters eat in Range of Ghosts?

They eat trail food in the book. No stew. Diana Wynn Jones’ Tough Guide to Fantasyland has a terrific excoriation of stew in journey stories. She took great offense to stew. It cooks all day, over a campfire.  If your characters are traveling, they’re not eating stew.

Would you talk more about the importance of getting details like that right?

Reading Jones’ book was edifying for me. It really started me thinking about logical consistency in worldbuilding: what characters eat, wear, what materials they use to make things.  Where they get their equipment.

While working on The Sea Thy Mistress, I had a conversation with my editor, Beth Meacham at Tor, about a cast iron stove.  Where, she wanted to know, in this post-industrial society did my character get this stove?  I had known that there needed to be a hauling industry, and a form of catalog for the procuring of the stove, and I added a paragraph in the book to explain where the stove came from.  I knew already in my head, that there’d be some sort of fantasyland Sears’ Catalog, but I needed to put it on the page. Thus was the student enlightened.

The world of Range of Ghosts is Khan-esque – it has a similar breadth of cultures that the empire of Genghis Khan did.

Yes, with the emphasis on ‘-esque.’  This is not historical fantasy.  This is a made up world, inspired by some of the events that took place during collapse of the Khanate.

One of the things that Genghis Khan did incredibly well was his system of government. It was astoundingly enlightened, if you ignore the conquering.  It included freedom of religion, and a notion of personal bankruptcy. Though if you went bankrupt three times, they executed you.

One of the interesting things about the Silk Road and the Khanate was that trade was so established and the roads were so good. You could get a post rider from Beijing to Alexandria – the entire breadth of Asia – in six weeks.  That’s how incredibly safe travel was.  Western explorers visiting the court of Kublai Khan, that’s not possible outside this period of time.

Granted, travel still wasn’t trivial by any means.  But it was possible.

I became wrapped up in the economics and the trade routes that sprang up across the region.  What happens is that you get a series of interlocking cultures. There isn’t a sense of isolation, instead, there’s a vast and sprawling group of empires through which people can move and trade moves freely.

In that kind of environment, cuisine becomes much more complicated.  It’s not limited in terms of spices and ingredients to what’s available locally.

An early reader for the book questioned that a character knew the color of olivewood.  But this character has seen olivewood, because of the road.  It’s hard for a modern reader to understand, but strawberries really did exist in fourteenth century Asia.  They had oak trees, Himalayan oak.  Things that we don’t think of as stereotypically Asian were present in these cultures.

How does the interweaving of cultures play out in the world of Range of Ghosts?

I’m continuing to have a great deal of fun playing with that. I’m making it evident that while everyone has their own cuisine and ingredients and sense of flavors and scents, I also wanted to show that there’s been cross-pollination.  That there is an economy.

In Range of Ghosts, the cross-pollination tends to wander out from food. Food was one of the ways I tried to show diversity of cultures.

It appears in travel to new places, in architectural design and art that is familiar from some other place, now recreated and executed in a different manor.

It appears in the experience of new things.  In the book, the characters journey to the Rasan Empire.  The protagonist, who has never been to Rasa before, is handed a bowl with unfamiliar food and unfamiliar meat.

Do we ever learn what that dish is?

It’s never stated what that meat is, but the world of Range of Ghosts has megafauna.  That’s one of those things that are in the author’s head but not in the book.  In the second book, there’s a scene with people herding dinosaurs, so in my head, I’ve figured out that the bowl with the unfamiliar meat is dinosaur.  Man, the folks at PETA will love me.

Characters in many of your books and online works cook much more edible things, yes?

Ok, edible.  Yes – in Shadow Unit, an online serial narrative about FBI agents who fight monsters – several of the characters are accomplished cooks.  One is a food blogger.  Emma Bull and I got to be Chaz’ test kitchen.  Chaz is a Beta (a semi-superhuman) who requires 6,000-12,000 calories a day.  He eats a lot.  And one of his recipes is for salted caramels – which I happen to be making a batch of now.

(The staff of Cooking the Books did not hesitate to inform Ms. Bear that we have a weakness for salted caramels. We have no shame whatsoever.)

Here’s a link to his recipe, as part of the Shadow Unit narrative.

Thank you so much for talking about food with us today – now I need to go eat All the Things.  We hope you’ll return for book two?

Elizabeth Bear’s achievements in the realm of speculative fiction include two Hugo awards (2009 for the novella “Shoggoths in Bloom” and 2008 for the short story “Tideline”), and the 2005 John W. Campbell Award for Best New Writer. She is a prolific writer, with 23 novels  and a vast number of short stories in print. She teaches writing atViable Paradise.  If you ask her nicely, she may tell you the secret for making blackbird pie.

Fran Wilde is a writer and technology consultant. She can tie various sailing knots, set gemstones, and program digital minions. Her short stories have appeared in Nature and Daily Science Fiction, and her nonfiction in Strange Horizons.  “The Chimerical Kitchen: Cooking the Books with Elizabeth Bear” originally appeared on her blog.