Have you heard of the Andre Norton Award? Ever wonder how the books are nominated? What books qualify? Who picks the winners? Or maybe you’ve just been curious to learn more about young adult (YA) fiction or middle grade (MG) fiction. Well, you’re not alone. To help shine a little light on this relatively new award, a group of YA & MG fiction writers have gotten together to talk about all of these things and more as part of the Norton Award Blog Tour, which will be posted on Underwords as well as the Science Fiction Writers of America’s (SFWA) blog. 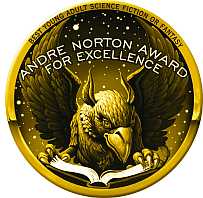 The Norton Award for Outstanding Young Adult Science Fiction or Fantasy Book is one of the most important awards bestowed upon writers of YA & MG fiction. Named after Andre Norton (1912–2005), the award was established in 2005 by former SFWA president Catherine Asaro and the first SFWA Young Adult Fiction committee (1). The award nomination process, like the rest of the Nebula Awards, invites nominations from SFWA members, but it also includes a jury component. The Andre Norton Jury, comprised of 3-7 SFWA members, reads the nomination year’s middle grade and young adult fantasy and science fiction, and may add up to three titles to the list of Norton finalists. The ultimate decision on the winning title is made by SFWA’s members in a vote.

We look forward to having you join us for the tour. So, join us over the next two weeks and share your thoughts in the comments section of each post.

For those of you who want more specifics about the rules for the Andre Norton Award, we’ve included an excerpt from the official rules that are published on SFWA’s website. For the very curious, you can also read the complete Nebula Awards® rules, including the Ray Bradbury and Andre Norton Awards.