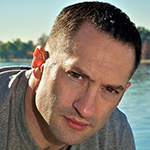 I can’t shake the feeling that there’s some amazing party, filled with fas­ci­nating people, some­where nearby. Artists and intel­lec­tuals and adven­turers, all mixing and charging the air with sto­ries. I wasn’t invited.

It’s a familiar feeling, one that took root in ado­les­cence and never left me. These are the wages of growing up a nerd. I fig­ured it out for the most part, but there’s always the lin­gering tracery of social anx­iety, echoes of years spent strug­gling to make friends, to date, to find a rhythm in a world that seemed built to embrace others. Even now, I spend my life with one foot rooted in two very dif­ferent social cir­cles (the gen­er­ally con­ser­v­a­tive realm of military/law enforce­ment, and the relent­lessly mav­erick cul­ture of spec­u­la­tive fic­tion), and rarely feel fully at ease in either.

I think it’s that feeling that, at least in part, drove me to write. My sub­con­scious con­jured an image of a fab­u­lous party, filled with other writers and pub­lishing types. A place where I could walk in the door to a chorus of cheers, the “Norm” moment, where guard could be let down com­pletely, where there was only shared vocab­u­lary and a fluid ease that would make the jit­ters go away. There was a social circle that would be the payout for all the rejec­tion and worry and sweat equity I poured into my books. When I talked about it with my brother, I simply described it as “that.” I wanted to have “that.”

All I had to do was get a book deal. I would break out of the world I knew and set up in some secret corner of the social fabric, a back­stage pass to the world of writers that I just *knew* was out there, even though I had never seen it before.

Rereading this, it’s ridicu­lous, embar­rassing even. But it’s true. Some part of me believed it, and I’m grateful it did, because it was a pow­erful moti­vator to lock on and put down the blood needed to get where I wanted to go.

I have a friend, a former Navy SEAL who later par­layed his sin­gular fear­less­ness into a social life the likes of which would make Hugh Hefner blush. Once I became a pro writer and moved to New York City, he railed at me to join the party. He held up the fic­tional char­acter of Hank Moody as his vision of the writing life, was so dis­ap­pointed that wasn’t what I was doing.

But by then, I was already learning the truth.

There is no party. Not beyond the hour or two at a con or pub­lishing event where you get to show off for a shining moment, bask in the acco­lades for a few min­utes, fan boy gush face to face over someone whose work you admire but never hoped to meet.

And then it’s over, and you’re left with the work.

I met the other pro writers. I met the actors and pub­lishing pros and poets and painters and new media pio­neers. I got to see their secret faces, the ones I knew they didn’t show the audi­ences at panels and during inter­views. They looked pretty much the same. Pretty much like mine.

They were busy people, raising chil­dren and keeping their home fires burning. They were working and wor­rying and trying to build a career. The inter­na­tional book tours that looked so glam­orous were exhausting treks where they lived on unhealthy restau­rant food, got entirely too little sleep and missed their fam­i­lies like crazy.

And there was always the work, hov­ering over their head like the sword of Damo­cles. The relent­less feeling that no matter what it was you were doing, if it wasn’t writing, then it was slacking.

In the end, I was the same person. I had books to write, I had pro­mo­tion to do, but nothing else had really changed. I came to slowly realize that the reward for the work was the work itself, the knowl­edge that it’s a thing well done, a thing that is hard to do. A thing you wanted and strived for and made happen.

I wish they had told me, because there will be times when the grind itself must be the thing that drives you. You have to love the effort divorced from the result. It’s a tough con­cept to wrap your head around, but you need to. I struggle to do it all the time, but when I manage it, it sees me through the inevitable stretches where inspi­ra­tion is faint and dis­tant, where there is nothing to be done but do your time at the key­board. I’ve often said that “I hate writing, I love having written,” but the truth is that I’m starting to move past it. Not always, but in fits and starts. There are moments when I’ll be head down in a story and come up for air only the realize that for once I wasn’t thinking about what other people would think of it, I was lost in trying to make it perfect.

Because writing is your job, and this job has a night shift, and a weekend shift. It’s mer­ci­less, and your boss is a tyrant. Your cus­tomers are fickle, demanding. If you let them down, they will eat you alive.

I wish someone had told me, so now I’m telling you.

It’s the work. That’s all there is. There is no That. The party you imagine is hap­pening. It’s full of gor­geous and fas­ci­nating people.

But it’s not the artists. Not the ones who are changing the world with what they create. They’re busy. They’re tucking in their kids, they’re taking the clean dishes out of the washer and stacking them neatly in the cab­inet. They’re putting the mail on the counter with a sticky note reminding them to take it to the post office tomorrow.

And then they’re tip­toeing into their offices and firing up their lap­tops, or heading into their studio and con­fronting the canvas. It’s Sat­urday night and it’s late.

As a secu­rity con­tractor, gov­ern­ment civilian and mil­i­tary officer, Myke Cole’s career has run the gamut from Coun­tert­er­rorism to Cyber War­fare to Fed­eral Law Enforce­ment. He’s done three tours in Iraq and was recalled to serve during the Deep­water Horizon oil spill.