A few years ago, I blogged about early termination fees, a.k.a. kill fees, in publishing contracts, and why they are not a good thing.

For obvious reasons, kill fee clauses are onerous for authors, who in some circumstances might have good reason to want to end a contract early, and can’t do so without opening up their wallets. Plus, many publishers employ kill fee clauses abusively, holding them over the heads of unhappy authors, or attempting to use them as an income source by offering to jettison dissatisfied writers at the slightest provocation, or terminating the contracts of writers who’ve pissed them off and demanding the fee even though termination wasn’t the writer’s decision.

Here’s an actual example of this kind of abuse.

Problem publisher No Boundaries Press, which apparently stopped paying its authors sometime in 2012, closed its doors at the end of this summer. According to reports received by Writer Beware, NBP’s owner–who allegedly goes by several aliases, including Kharisma Rhayne, Denise Caroline, Mystee Blackwood, and Denise Blackwood–has absconded to Indiana, leaving sizeable debts and many angry authors behind. Some didn’t even know about the closing until they read about it online.

Author Erica Pike has blogged about the whole ugly experience (what she reports is very similar to the reports I’ve received). As the problems at NBP mounted, she became more and more frustrated–and here’s where early termination fees come in:

By now, you’re probably wondering why the hell I didn’t just send a “breach of contract – give me my shit back” message. The problem was that I couldn’t. All the contracts had an early termination clause stating that I’d have to pay NBP money to get my rights back (all the authors were chained by this clause). The new contracts I’d signed had an increased early termination amount, so I was looking at impossible penalty fees if I pulled my books.

Then, abruptly, NBP announced that it was closing.

On June 5th…”Heather” (who had been assigned to handle everything because Kharisma could no longer work due to poor health) sent a message saying that NBP was closing. We would all get our rights back (yay!), but had to pay her for covers and edits if we wanted to continue using them.

So not only did NBP hold its unhappy authors hostage with the threat of huge termination fees if they pulled their books early, it attempted to use the termination clause to make a quick buck on the back end–even though the clause was meant to cover early termination by authors, not premature termination by the publisher. (And notwithstanding the fact that it owed its authors substantial amounts of money.)

I’d go farther. If your contract includes an early termination clause that imposes a fee and the publisher won’t remove it, consider walking away. It’s not just that early termination clauses have the potential for abuse–it’s what the clause says about the publisher’s attitude toward its authors, and its willingness (or lack of willingness) to shoulder the risks of publishing in exchange for the privilege of making money from its authors’ intellectual property.

If you do choose to go forward with a contract that includes an early termination clause, be aware that the clause may come back to bite you, in ways you may not expect. 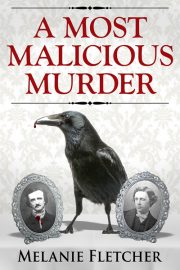 In an alternate 1851, a newly remarried Edgar Allan Poe must team up with a young Charles Dodgson (aka Lewis Carroll) to stop a serial killer stalking the streets of Oxford. If they don’t succeed, Poe may hang for a crime he didn’t commit.