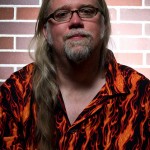 Lake began publishing stories in 2001 with the story, “The Courtesy of Guests” and went on to win the Campbell Award for best new author in 2004.  His win inspired him to create a set of artifacts around the award, including the Campbell tiara, which is passed from winner to winner, along with official Campbell nominee pins.

Lake’s early writing, most of which appeared in what were considered non-traditional venues, was collected in Greetings from Lake Wu, which was illustrated by Frank Wu.  At the time, Lake also co-edited the Polyphony anthology series and a variety of other anthologies with Deborah Layne.  His first novel, Rocket Science, was published in 2005. Lake’s subsequent novels include the books in the City Imperishables series, the Mainspring universe, and the Green universe, as well as the stand-alone The Specific Gravity of Grief.

In 2008, Lake was diagnosed with colon cancer and has very openly discussed his diagnosis and treatment over the years.  When he used crowdfunding to have his entire genome sequenced in the hopes that it would suggest a treatment or serve to help future cancer victims, Lake raised nearly $50,000. Around the same time, Waterloo Productions began work on a documentary following Lake’s battle with cancer, entitled Lakeside.  A rough cut of the film was shown at LoneStarCon with its final release scheduled for 2014.

Lake has been nominated for both the Hugo and the Nebula for his novella “The Stars Do Not Lie,” and has also received nominations for the World Fantasy Award, the John W. Campbell Memorial Award, the Theodore Sturgeon Award, and the Sidewise Award.  His 2003 novelette “Into the Gardens of Sweet Night” was a quarterly winner of the Writers of the Future contest as well as a Hugo nominee. Lake was popular among authors and fans alike, emceeing with his friend Ken Scholes at the 2011 Hugo Award ceremony in Reno.

SFWA President Steven Gould noted, “Even though we knew this was coming, the loss of a friend and colleague like Jay is devastating. The directors and staff of SFWA extend our deepest condolences to his family and friends.”

If you want to make a contribution in Jay’s name, please make it to: 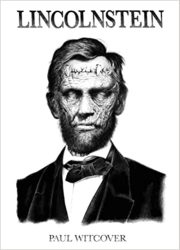 “Lincolnstein is compelling, audacious, ambitious, and both reflects and rejects the ugliest truth of the American monster.”—Paul Tremblay, author of A Head full of Ghosts and Survivor Song