Reposted with permission via Bookview Cafe: 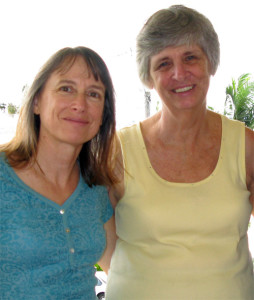 Linda Nagata and Carol Severance in 2011

I was saddened to learn that Carol Severance has recently passed away.

For those who don’t know her, Carol was a science fiction writer from Hawaii. There aren’t many of us here in the islands, and she was an important friend and mentor to me early in my career.

Carol’s own career was all too brief, but it was both unique and significant. Carol and her husband Craig had lived and worked in Micronesia. Their children grew up in Hawaii. Her experience and her love of Polynesia led to a body of work focused on themes and settings that reflected Polynesian culture.

Carol’s first novel, Reefsong, was published by Del Rey in 1991 and won the Compton Crook award for best first novel. In those days I think the science fiction field made less distinction between adult and young adult novels. Reefsong had wide-ranging appeal and for many years afterward its adventurous plot and islander theme made it popular in Hawaii’s middle schools and high schools. My daughter read it many times over; it was one of her favorite books growing up. Reefsong is a novel that should not be forgotten, especially in Hawaii. It’s presently available as an ebook, and I hope that many more people are able to discover it that way.

It was my good fortune that Carol’s career had started a few years before mine. She was always ready with advice and perspective on the writing field. Though she lived in Hilo, on the Big Island, in those early days she would often come to my island of Maui to write in the quiet isolation of a south-shore condo, and on those visits we’d usually arrange to spend some time together.

Once, we even made a trek together, through Denver and down to New Orleans for a science fiction convention.

Unfortunately, in the ensuing years Carol faced health issues. She no longer visited Maui, and it became difficult for her to write. I began to hear from her less and less until we lost touch altogether. Then in 2011 I found an old phone number and decided to give it a try. I was thrilled to hear Carol’s voice on the other end of the line. She sounded wonderful. Soon after that I was able to visit both her and her husband Craig at their Hilo home. At that time, Carol was no longer writing, but she was active in the art community and she and Craig seemed very happy.

That visit was the last time I saw her. I’m so grateful I had that chance. My condolences go to her family. Thank you for sharing Carol with the SFF community. For those reading this, I encourage you to celebrate her life by exploring her fiction.