The Libertarian Futurist Society has elected Harlan Ellison’s story “‘Repent, Harlequin!’ Said the Ticktockman” to its Hall of Fame.

Originally published in Galaxy in December 1965, “Repent, Harlequin!” portrays one man’s surrealist rebellion against a repressive future society obsessed with timeliness. Ellison’s rule-breaking narrative structure and style have made the story memorable to generations of readers.

The award ceremony will take place Saturday, May 9, at Marcon, an annual science fiction convention in Columbus, Ohio, as part of the Libertarian Futurist Society’s participation in the celebration of Marcon’s fiftieth anniversary. The LFS will present a Special Award for Lifetime Achievement to F. Paul Wilson in the same ceremony.

The awards consist of plaques with gold coins mounted on them, a symbol of free minds and free trade.

The Libertarian Futurist Society has presented annual Hall of Fame Awards since 1982. The first awards went to Robert Heinlein’s The Moon Is a Harsh Mistress and Ayn Rand’s Atlas Shrugged. In 2001 the award was opened to works other than novels. Previously recognized authors of shorter fiction include Poul Anderson, E.M. Forster, Robert Heinlein, and Vernor Vinge.

Prometheus Awards for Best Novel and Hall of Fame commemorate works of science fiction and fantasy with pro-freedom themes. Award winners are selected by a vote of the membership. Special Award winners are proposed by the Board and approved by a vote of the membership. The Prometheus Hall of Fame award for Best Classic Fiction honors novels, novellas, stories, graphic novels, anthologies, films, TV shows/series, plays, poems, music recordings and other works of fiction first published or broadcast more than five years ago.

The Prometheus Award, sponsored by the Libertarian Futurist Society (LFS), was established in 1979, making it one of the most enduring awards after the Nebula and Hugo awards, and one of the oldest fan-based awards currently in sf. Presented annually since 1982 at the World Science Fiction Convention, the Prometheus Awards include a gold coin and plaque for the winners.

For more than three decades, the Prometheus Awards have recognized outstanding works of science fiction and fantasy that stress the importance of liberty as the foundation for civilization, peace, prosperity, progress and justice.

For a full list of past Prometheus Award winners in all categories, visit lfs.org/awards.html. Membership in the Libertarian Futurist Society is open to any science fiction fan interested in how fiction can promote an appreciation of the value of liberty. 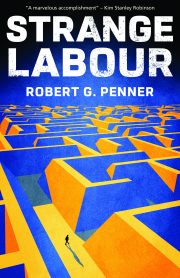 The global population has left the cities and towns to work themselves to death in the construction of monumental earthworks. The adults unaffected by this obsession are part of a dwindling population that survives in the margins of this new world.