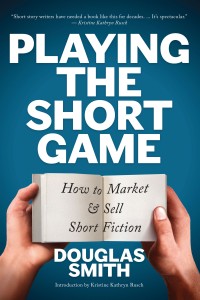 I began my writing career, as have many writers, with short fiction. After I’d made my first few professional sales, I came across a new set of markets I’d never considered before: foreign language (meaning non-English) magazines and anthologies.

I stumbled across a mention in Locus of a German publisher who was considering stories for two anthologies, one SF and one fantasy (and yes, in German). But the publisher was soliciting submissions of stories that had already appeared in English pro markets.

Have my stories published in another language? To a beginning writer, this sounded very cool. So I sent in a story for both anthologies, and to my delight, both were accepted (“Spirit Dance” and “New Year’s Eve,” if you care).

Those sales set me searching for other non-English languages markets for short fiction. As I found more and more, I began to maintain a market list on my website, at first for my own reference, but eventually as a free service to other speculative short fiction writers. My Foreign Market List is still going strong, and you are welcome to check it out.

Where am I going with this? What does this have to do with SFWA? I’m getting there.

The Benefits of Selling to Non-English Markets

First, anything you make from these sales is found money. You’ll generally get less for foreign reprints than for selling first rights to a professional English market, but you can sell your story in multiple languages. My foreign language sales have averaged over $100 per sale, so with sales to several foreign markets, you can easily pick up an additional few hundred dollars per story.

Second, like any sale, it broadens the audience of readers who gain exposure to your work. If you also write novels (or plan to), a resume of short stories in non-English markets can assist in foreign rights sales for your longer work, as can the relationships you’ll build with foreign publishers, editors, translators, and illustrators. My relationship with a French magazine publisher eventually led to him publishing a collection of my fantasy short stories in France.

Third, there’s the fun factor of seeing your byline beside some of the biggest names in fiction. Even when I was starting out, my foreign language sales let my name appear on the cover alongside the likes of Stephen King, Neil Gaiman, James Branch Cabell, and H.P. Lovecraft.

Finally, many foreign magazines include beautiful illustrations for your story that you won’t get in even pro English markets and that make a great visual addition to your website.

Unfortunately, there are some difficulties you’ll likely encounter if you start submitting and selling to these markets.

Payment logistics can sometimes be challenging. PayPal is becoming more common, but some markets will still pay only in local currency or via bank transfer, both of which involve banking fees. Some of the larger markets require you to submit an invoice to their payables department before they’ll issue a cheque. And cheques drawn on a foreign bank are not easy to cash even in a large North American city. Some will also deduct a local income tax withholding amount from the payment.

Response times can also be very long. Communication with the editor can also sometimes be challenging, as English is frequently not their first language.

Remember also that these markets face the same challenge in staying alive as do English language genre magazines. Many (even the paying ones) are run on a for-the-love basis, so production schedules can vary wildly, as can the time frame for receiving your payment and contributor copies. And some will have short lifetimes. I’ve had about a dozen foreign languages sales where the story was never published because the market folded.

I’ve had over seventy foreign language sales, in twenty-five languages and thirty-one countries. Aside from the minor inconveniences mentioned above, the vast majority of those sales have been positive experiences.

I’ve also unfortunately had three situations where a market has published one of my stories but did not pay me. In each case, I tried to obtain payment myself over several months but with no success.

SFWA Griefcom to the Rescue!

This is where SFWA comes in.

SFWA has a committee, called Griefcom, whose mandate is to… Well, why don’t I let them tell you? Here is an extract from the Griefcom page on the SFWA website (http://www.sfwa.org/member-links/committees/griefcom/):

“Griefcom, SFWA’s Grievance Committee, exists to help you, the SFWA member, when you encounter problems with your editor, publisher, agent, or other writing-related business associate. We’re the last resort before legal action, but we’re not the first resort. That would be you.”

As they state above, Griefcom is not your first resort. You have to have made every reasonable effort to communicate with the errant publication, explaining your situation while being both civil and factual. The SFWA Griefcom page also provides info on what you need to do before you contact them: http://www.sfwa.org/member-links/committees/griefcom/what-to-do-before-contacting-griefcom/. Once your efforts have failed, you can contact Griefcom.

Each of the three times I’ve involved Griefcom in the past, the result has been very positive. They have been responsive, supportive, and easy to work with.

In two situations, they quickly extracted full payment for me from the foreign publishers. In the third, the publisher had just closed shop completely, not paying anyone—authors, editors, translators.

However, even in this case, Griefcom’s interaction prompted the editor of the cancelled anthology (who also hadn’t been paid) to offer me a spot for my story in a new anthology he was editing for a different publisher.

So, Griefcom is three for three for me. And the payments they prompted paid for multiple years of SFWA dues.

This is why for me, even ignoring the many other benefits of SFWA, the availability of Griefcom for members more than justifies the annual dues.

Douglas Smith is an award-winning Canadian author whose work has appeared in twenty-five languages and over thirty countries. His fiction includes the urban fantasy novel, The Wolf at the End of the World, and the collections Chimerascope, Impossibilia, and La Danse des Esprits. His non-fiction guide for writers, Playing the Short Game: How to Market & Sell Short Fiction, is a must read for any short story writer. Doug is a three-time winner of Canada’s Aurora Award, and has been a finalist for the John W. Campbell Award, CBC’s Bookies Award, Canada’s juried Sunburst Award, and France’s juried Prix Masterton and Prix Bob Morane. A short film based on Doug’s story “By Her Hand, She Draws You Down” won several awards when it toured film festivals around the world. His website is www.smithwriter.com and he tweets at twitter.com/smithwritr .  His Foreign Market List is a popular resource for short fiction writers around the world. You can access the FML here: http://www.smithwriter.com/foreign_market_list.htm.