(Part One can be found here.)

Day three is no better. I’m not sure what I’m doing here. I walk endlessly, retracing every path a dozen times. I sit in the sun surrounded by thrift and sea campion and dying bluebells. The South Coast path takes me past Winter Pond and Horse Bottom to the lighthouse, where I descend on another path past the Quarry and Wildgoose Bay.

My word count is atrocious. I have no new ideas for the sci-fi story that is due next week. I am endlessly distracted.

It’s unreal how the cold seeps into everything. I rummage through the island stores looking for something to bake. I have eggs and butter, I find self-rising flour. The dried goods of the island includes a large crate of British Mars Bars (US-style Milky Ways). I spend the afternoon in the kitchen, using the candy bars to make something vaguely similar to brownies.

I keep coming up with bright ideas which would increase my word-count tremendously. If I had a better desk, if I didn’t have a deadline, if I had a soft pillow, if only it wasn’t sci-fi, if I had something to drink, if my mother had paid for elocution lessons when I was a child.

The brownies are a big hit, especially with the researchers who have been on the island for months. I make friends. 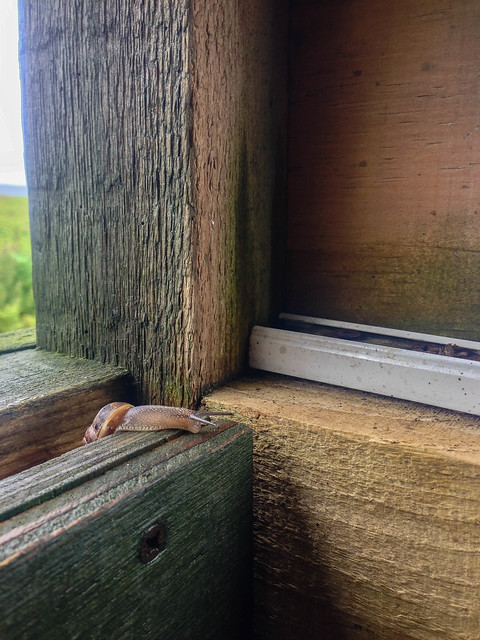 The fourth day on the island is slightly improved. I decide maybe I should be writing fantasy instead of struggling with near-future technology. I walk the paths again, this time clocking just over seven miles. I have an almost respectable word count of 3,393 but nothing like what I had planned and no progress on the sci-fi stories.

The next morning, I walk the south coast path again to the lighthouse. There are not very many paths on this island and I know them all by heart already; however, I have a new goal. I dismissed the hide at the lighthouse for the spiders but I want to take a another look. It is the most structurally interesting: a drystone hut with a view out to the open sea. Richard-the-warden has assured me that if I air it out, it will be inspirational. I follow the path (white painted rocks show where the path goes, red rocks are a warning not to continue) and open every window and door of the hide. I sit on a long slate bench out front, watching the seas for dolphins and porpoises while I wait for the spiders to scurry away somewhere. An hour passes. 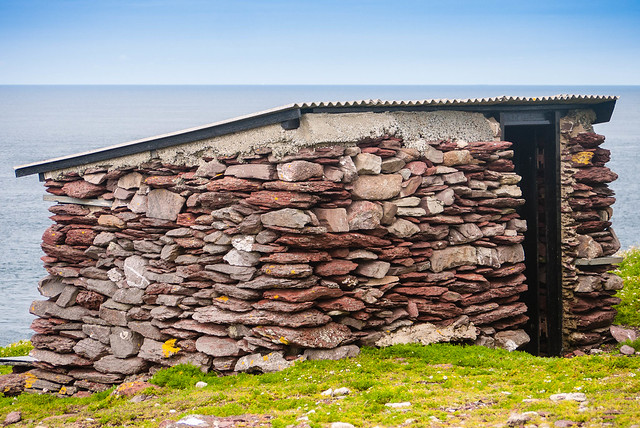 The ground in front of me slopes down. There is a red painted stone marking the end of the path, which makes me laugh, because of course I’m not going to stumble down to the cliff edge, the sea crashing against the rocks a hundred below. I remember the painted stone tiles around the lighthouse, each numbered and allowing access to a shearwater burrow. I pull out my camera. I should get a photograph while the sun is bright.

I walk around the side of the hide to where I can see the tiles. The numbers are high: I noticed number 6 and 7 near the path but here the tiles are numbered 150 and more.

The grassy earth is soft under my feet. I feel myself sink; the ground is giving. I step forward, but too fast, too abrupt. My right foot breaks through even as I’m trying to leap back, to get back onto stable ground. There’s a dark hole in the ground. I can’t see, don’t dare get near, but I imagine there’s something quivering inside. I have destroyed the burrow of a manx shearwater.

It seems a long walk back to the cottages. I am filled with dread but I know I have to find one of the wardens, tell them. I find Giselle in the kitchen and blurt it out. I was by the burrows. I broke through. “Tell me what happened. Tell me where,” she said. “I’ll go.” She’s out the door before I can even say thank you. She’s not doing it for me.

I find a dark corner and sit alone. 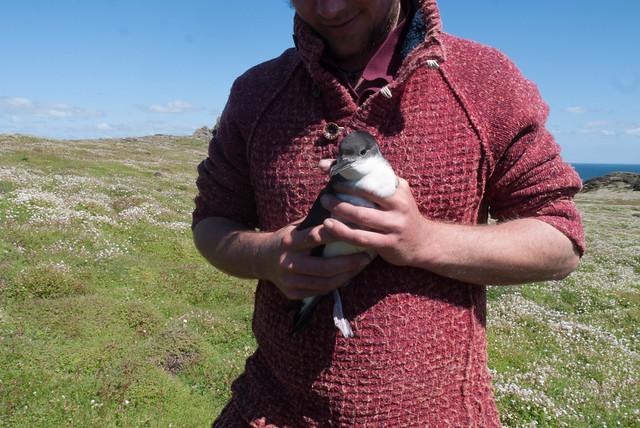 Richard finds me about an hour later and tells me that the bird was completely exposed, it was a miracle that it had survived. That if there had been fledglings, they’d have all been lost. Giselle has covered the hole but what was I doing there in the first place?

“Were there white rocks there?”

He cut me off. “Were there white rocks to show you it was safe to walk there?”

“We have this system for a reason. That is the most vulnerable part of the island. Only ever go where there are white rocks. OK?”

“All right,” he says, and walks away.

I feel awful about the bird, although it’s safe now and covered. They are beautiful black sleek things. I can almost see her, trembling as the dirt clods fall onto her and her eggs, as the sun shines in lighting her up in her most vulnerable position, the gulls circling overhead. I feel awful that Giselle and Richard might think that I deliberately broke the rules, that I think they don’t apply to me. After everything Richard’s told me, how could I possibly go blundering across the burrows — the island is honeycombed with them — and think it would be all right.

I spend the rest of the day in the courtyard, refusing myself the pleasure of walking the island.

My wordcount is zero.