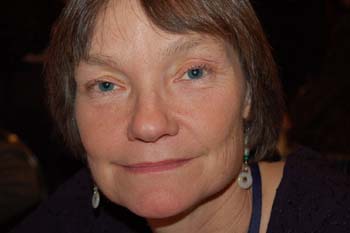 Mary Rosenblum (b.1952) was killed on March 11 when the small plane she was piloting crashed near Battle Ground, Washington.

Rosenblum’s debut novel, The Drylands, received the Compton Crook Award and was followed up by novels Chimera, The Stone Garden, Water Rites, and Horizons. Beginning in 1999, she also began publishing mysteries under her maiden name, Mary Freeman.

In 2009, he short story “Sacrifice” received the Sidewise Award for Alternate History.  She has also been nominated for the Nebula, Hugo, Tiptree, Endeavour, and Sturgeon Awards.

Rosenblum published a collection of her short fiction, Synthesis and Other Realities in 1996.

President Cat Rambo had this to say in remembrance:

Rosenblum was one of the vital components of our Pacific Northwest Community writing community. Self-reliant, pragmatic, and incisive, she could butcher a sheep or make cheese as easily as she could write a story that showed a depth of human understanding many of us work a lifetime to achieve. She will be deeply, dearly, heartbreakingly missed.