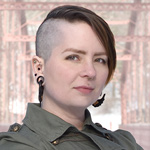 These infinitesimal pieces of energy hurtling through space and time, vibrating in a tempo and linking with other small pieces of energy, each doing their own pulsating cha-cha in whatever organized way they’re compelled to do.

I wonder if a single atom thinks it’s alone or if it hopes that as it resonates with atoms around it on a quantum level, it might be accepted by others and form a bond?

Creating a story is a solitary thing and though we have to quiet conversation and focus on our stories when it is time to work, doing so in a group setting can be a phenomenally different experience than performing the same activity on our own – when all the human atoms around us spin toward the same purpose, our focus is amplified as we resonate with the other storytellers in the room.

I was unprepared for the wall of celebration, creativity, and acceptance I felt when I walked into the midst of a crowd of storytellers at my first SFWA Nebula Conference in 2017.

I attended the Nebulas on impulse. I had just sold my Peridot Shift trilogy to Parvus Press. Excited and light-hearted over the book sale – and with just enough time to submit a vacation request – I accepted my new publisher’s invitation to ‘come on down’ as-it-were. If there had been more time to talk myself out of it, I would have. Imposter syndrome or budgeting concerns would have planted themselves in my mind and told me not only was I better off saving the money I’d spend on a hotel and the conference, but that I was also unworthy of the company I would find there.

I am so glad I didn’t have time to change my mind.

Once I arrived and checked in at a nearby hotel (the rooms at the Marriott were long gone before I even considered booking), I still had to get myself to cross the street, which was more a mental hurdle than physical. Three things were key in offsetting my shyness, crowd-triggered anxieties, and fear of the unknown: One, I knew someone who was attending (my publisher); Two, I signed up for a mentor when I registered online; and Three, I volunteered to help in the Book Sales Room. That I knew someone meant there was a friendly face in the crowd. That I had a mentor meant there were two(!) friendly faces in the crowd once we were introduced, that there was someone to whom I could pose questions, and someone who would introduce me to even more people. That I volunteered to work in the Book Room meant I had a purpose where I could busy myself, a confined space in which to meet more people, and another circle of people where I could resonate. Reassured by these things, I was able to pull myself out of my quiet, private hotel room, across the street, and into the conference.

It felt a lot like walking into a new high school in the middle of sophomore year. There were clusters of people who clearly knew each other well and I had flashbacks to being the odd one out. But there was something vibrating in the air I could recognize, a buzzing energy that formed a white noise floor between and around each attendee: creativity, passion, and camaraderie.

This energy inspired me to do something that would have horrified my sophomore high school self: I walked up to people and just … joined in. Everyone I met was warm and friendly, even (and especially) the people I was sure would be too closely knit with each other to welcome me. I didn’t recognize anyone by their faces and found myself engaged in casual, friendly conversation only to later realize I was talking to someone whose work I read and admire. I got to meet authors I knew and became aware of others whose work I would later seek out.

I tried not to talk too much; I was there to listen and absorb. There was so much to take in and I wanted to sponge it all up. The panels and talks gave me insights I never considered. I observed people who are entirely underrepresented in my own spheres and, up until that point, even in most of the fiction I read. I learned about new authors, identities, perspectives, and subjects, and came home with a stack of 36 books to read plus twice as many titles saved on my phone.

At no point during the weekend did that sibilant voice of my imposter syndrome completely go away, but the cheerful conversation and warm crowd did a phenomenal job of drowning it out. At no point during the weekend did my shyness and introverted instincts subside, but I told myself I had the eight-hour drive home where I could be silent, alone, and reflective. I made sure I enjoyed the weekend, greeted everyone I saw, from the restaurant or coffee shop in the lobby, in the packed elevator, up to the TOR hospitality suite floors above. I was exhausted but jubilant after the event and am so glad I milked the weekend for everything I could.

When tickets became available for this year’s Nebula conference, I snatched them up, and same with the block of on-site hotel rooms. I’m no less introverted this year and no freer of imposter syndrome, but I can’t wait to step into that conference hall again and feel the buzzing atoms of hundreds of writers so different from me and yet fundamentally just like me as we all resonate together.

Each morning before the sun rises, R J Theodore rises to write coffee-fueled science fiction. Her debut novel, FLOTSAM will be released by Parvus Press in print, digital, and audio on March 27, 2018. You can find her on Twitter @bittybittyzap.