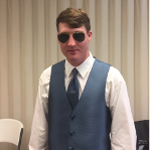 So you’re writing SFF, and you’ve got spaceships to design. Engine systems to map. A haunted forest to populate. A talking badger to draw. If you’re not a rocket scientist writing hard sci-fi, how are you supposed to make your version of James S.A. Corey’s Rocinante, you know, fly?

Don’t explain it unless you must.

“What? That doesn’t even make sense,” you’re probably thinking right now. “The reader is going to be left wondering, and then I’ll get bad reviews, and then I won’t sell any books, and then I’ll be back to my day job at Walmart!”

Hang on. Before you start unpacking your blue vest, hear me out.

Most readers won’t care if you can explain every aspect of your spaceship’s propulsion mechanisms, they’ll care if you can tell a good story. Show the reader your world through your character, because worldbuilding is a triple frontier—plot, character, and world intersect in countless ways.

If you’re writing an engineer, or a character speaking to an engineer, it’s a great opportunity to showcase your worldbuilding and how physics works in your universe. But only if it flows with the story. I get bogged down reading a long description of a culture’s history and artistic exploits over a thousand years of fantasy history. Tell me about the culture and the art and the magic when it’s necessary to the plot and the character.

Several authors use this kind of worldbuilding, the kind seamlessly integrated into the story itself. V.E. Schwab’s A Darker Shade of Magic is a masterpiece of worldbuilding. Schwab doesn’t tell us the answers, or how the court in Red London works, until we need to know—mostly in the second book, when it’s essential to the development of Lila Bard and Alucard.

In science fiction, Corey’s Leviathan Wakes executes similar worldbuilding. The center of the story is the crew. Readers care about people, not necessarily the mechanics of gravity drives. We’re told what we need to know about these people and how their environment—the ship, the gravity drives, and the human race’s star-ward expansion—has shaped them. How the difference in settlements has resulted in racism and classism, in political clashes, and in characters with strong motivations.

Corey is using classic “show, don’t tell” technique. Without the worldbuilding here, we wouldn’t understand the crew of the Rocinante and their social positions. But if the story dumped us into a fifty-two paragraph monologue about Mars and Earth and the Belt and biological changes and on and on and on…who would buy it? I think this is why Corey waited until the second book to bring in a politician like Avasarala. Once the story had some momentum with the first book, we needed the political side to really understand where things stood.

Writers, experienced or amateur, walk a tightrope with their worldbuilding. Too much bores the reader. Too little makes the story shallow. If you don’t tell me the limits of your wizard’s powers of foresight, you risk a plot hole the size of Texas. Why didn’t he know that the rogue intended to steal his crystal ball worth ten thousand ducats? On the other hand, if you spend three pages telling me why dollars are ducats in your world, I might as well be reading my nephew’s economics textbook.

I’ve seen writers insist that they can’t start on their fantasy epic until they have their languages built, their financial system in place, and the rules of the magic system concretized. I tried that myself. Everyone writes in a different way, and I would never fault someone for pursuing a method that works for them. But the danger with the Worldbuilding First approach is one of getting bogged down and never finding out who your characters are through experimentation.

Many writers find that once they get started, their characters take on a life of their own. When the characters start speaking, the author starts finding out what shapes them: their families, their beliefs, their social class, etc. That is the root of worldbuilding, when it intersects with traditional story elements like plot and character.

I love a good magic system as much as the next person, but what I really love is a magic system that affects how the protagonist lives. Is she in danger of death because of the type of magic she uses? Does the ship’s engineer have a mechanical arm, and does that make him feel disabled? If the mechanical arm has a welding torch, does he think of it as a superpower or does he long for flesh and blood? In short, I am most interested not when the author tells me of the existence and capabilities of mechanical arms or magic systems, but rather when I see how that mechanical limb and magic ability forces the character to grapple with themselves. Those details make a story feel real, even when it’s fantastic.

In writing, character affects plot. Plot affects worldbuilding. And worldbuilding affects character. This is a sort of triumvirate of terror, but it’s not so terrifying. Use the triangle as an opportunity. Write and experiment, and don’t worry about the originality of your worldbuilding. Focus on your character, and the worldbuilding will reveal itself.

Nathan Nance is a writer and editor of crime, sci-fi, fantasy, and any genre which captures the imagination. He loves richly-developed characters, plots, and worlds, and spends far too much time reading Robert Crais, Daniel Silva, Jim Butcher, and Kevin Hearne. He holds a BFA in Creative Writing and an MA in English, specializing in Rhetoric and Composition, because he thinks grammar and stylistics are sometimes more interesting than people. He works as an academic writing tutor and freelance editor. Follow him on Twitter @nathananance.