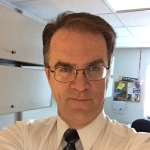 When I was eight, I wrote my first short story. It was bad, as the writing of an eight-year-old tends to be, full of tropes and endless misspellings. It long ago disappeared into the trash bin of my personal history. But my teacher gave me an A on the work, and I was hooked.

It will come as no surprise that, as I neared fifty, I began to wonder where the hell it had all gone wrong. What happened to the dreams of that eight-year-old boy? Had I missed the boat completely by waiting so long to pursue publishing as an adult?

I’d become a reader at a young age, devouring everything I could lay hands on. By the time I discovered the Hobbit in fourth grade, I’d become a fixture at the local library. My tastes became so well known that the librarian ordered books because she thought I might like them. Writing led naturally from that hunger for words.

In my early twenties, I took some creative writing courses in college. I got an invite to Stonecoast Writers Conference in the early 1990’s (before it became a well-respected MFA program), and spent a week with Walter Mosley as my instructor. I thought I was on the road to my dreams. I dashed off several stories and mailed them to Asimov’s and other magazines.

This is not a surprising story for many. Rejections are tough, and we’re only human. Many people give up after a few rejections. But it was worse for me. At the time, I lived wrapped in a blanket of introverted self-loathing, and I saw those rejections as an indication of the value of my worth as a writer, as well as a human being. Absolutely zero. I didn’t need further reminders of this fact beyond those already provided by my brain.

I focused on other things. I married, had kids, went back to school in my thirties to get a degree, and built a good career as a computer repair tech. I divorced, remarried, pushed people away, and made the mistakes people do when they are miserable inside. But along the way, I found help for my self-worth issues in unlikely places. I learned to, if not precisely love myself, at least be gentle with the person in the mirror.

I never entirely stopped writing. Pieces of short stories here and there. A poem while driving to work. The kernel of an idea for a novel and the first chapter of it. I’d lost the dream of publishing but couldn’t drive the writing out of my head. That stuff gets into your bloodstream, taints it with a sickness of words and metaphors until your fingers itch to bleed onto a page. I had to purge myself from time to time.

I was forty-four when I decided to pursue publishing again. By then I’d developed a thick enough skin to handle rejections. I was no longer that depressed young adult, sure he had no value. I knew my worth as a person. I’d gained confidence.

I sat down on November 1st of 2011 and began my first NaNoWriMo, penning what would become the novel I’d started fifteen years earlier. After 55,000 words, I trunked it. It was terrible, and I knew it. Two more years passed before my current wife, reading some of the pieces I’d worked on, encouraged me to try again.

I re-wrote the novel and started querying it. I penned a story, submitted it. Then a few more stories. I read everything I could about writing better prose, improving plotting and scenes, building strong characters. A dozen stories later, and there were still no sales.

I began to think perhaps I’d started too late. It worried me, that idea. I’d set fifty as a cutoff for pushing myself on the writing. I’d been getting up early every day to make time for it. With no results to show, this idea of age as problematic to a writing career weighed on me.

But I submitted an application to Viable Paradise not long after I turned fifty, and was accepted. That was the validation I’d been needing. Going to VP helped me decide to continue writing and trying to get published. My classmates have become close friends as well, and I cherish the mutual support we provide each other.

This summer I sold two more, both at pro-rates, and became a member of SFWA. At fifty-two, things finally feel like they’re on track. Age was not the impediment I’d believed. In reality, age liberated me from the brain weasels of my youthful self-hatred.

The truth is that you’re never too old to pursue a dream. Sometimes it takes longer to develop the skin necessary to weather rejections. You realize you have value. You are worthy. And story rejections are no reflection on you as a person. But we have to learn that in our own way, our own time.

Every spring I work on short stories. In the summer and fall, I work on novels. I’m fifty-two, and I’m a writer, and now I’m a published author of short stories. In time, I’ll sell a novel. And the eight-year-old version of me in my head will be shyly holding a handful of sheets of paper, words written in scrawling pencil upon the pages, a large, red letter A at the top, smiling as he realizes dreams come true.

It takes some of us longer to get there. Don’t let age hold you back. Let your eight-year-old you out into the world to share their stories.

But edit them carefully, because that kid can’t spell worth a damn.