Earlier this year, an author of color announced the acquisition of her new historical romance series. In direct reply to her tweet, someone publicly questioned the historical accuracy of the series. The author of color was prepared because she knew she would be challenged about “historical accuracy” and she provided an organized response. The challenger deleted her tweet but doubled down on her right to question the author and circled back to her own feed to gain sympathizer support for the attitude she was getting from the author of color because she “just asked a question.” For those sympathizers, I broke down the original challenge to demonstrate why it wasn’t just a question but, in reality, an insidious attack.

Let’s unpack this, because one might wonder why we’re even discussing historical accuracy in science fiction and fantasy. After all, these genres are fiction. Accuracy doesn’t need to come into play.

But here’s the thing: when the question of historical accuracy is raised regarding fiction, it’s rarely — if ever — actually about facts or history.

It’s about the default, the norm.

It’s about what some people consider to be true simply because they’ve never questioned those assumptions, and the reality they default to is often wrong.

When building worlds in science fiction and fantasy or any other genre, writers find ways to bring our readers into our worlds. Readers — whether consciously or not — will look for the familiar, for points of reference based on what they think they know as fact.

Here is where authors from marginalized groups face challenges above and beyond the writing of great stories. The burden of proving historical accuracy, a Sisyphean task, falls on authors of color. There are always going to be people who feel they have the privilege to question the author’s writing in the name of historical accuracy. And you know what? The challenge is generally delivered with a heavy dose of arrogance by someone flexing their privilege and baiting the author to get a rise out of them.

At that point, questioning marginalized authors about “historical accuracy” in their work is a thinly veiled attempt at gate keeping. It’s frustrating, infuriating, and exhausting. It’s not about history or accuracy.

It’s about prejudice and bigotry and exclusion.

Any author of color writing a diverse range of characters has to justify why those characters are in their worlds and why they are able to be anything but tortured and miserable. Authors of color are challenged about the right for their characters to exist, to be successful, to be happy, and by extension the authors are being challenged for their own right to exist, to be successful, and to be happy.

If an author of color defends themselves, they’re unreasonable. They’re rude or coarse. How dare they call out the gatekeeper and label them awful things, like racist?

Then come the gatekeeper’s very public tears and the pretense of being a victim, the many arguments to obfuscate the core topic for which they should be held accountable. Why is the author of color being so mean? Why are they being so unreasonable when the gatekeeper just asked a question?

The gaslighting is real.

It happens over and over again, not just to people of color but to disabled people, to those from any marginalized group. Sympathy is given to the gatekeeper, because we want to believe the nice victim who just asked a question. The gatekeeper has twisted the situation to their advantage and public opinion is distracted and redirected to start criticizing how beleaguered marginalized groups are defeating themselves when they snap or strike out at people just asking a question.

The core of this discussion began with a person attacking an author behind the guise of just asking a question about “historical accuracy” in order to assert their default belief that marginalized groups didn’t exist in that part of the world, in the time period of the setting of the book. Their assumption, their default, was proven inaccurate.

It is historically inaccurate to continue to ignore people of marginalized groups, or to include us only as token characters with two-dimensional lives. Worse, many accept this historical inaccuracy as default because it’s what they’ve experienced in the majority of science fiction and fantasy, as well as other genres and media.

The truth is that we, people from marginalized groups, have been here throughout the ages. We exist. We deserve what success we achieve through our accomplishments and we deserve to be happy. We deserve to thrive, both in the real world and in the worlds authors create.

Historical accuracy is important in science fiction and fantasy because it can change the default as it is known.

Historical accuracy can change assumptions, mitigate bias, and combat discrimination. It is a key ingredient in any creation and how it is used will define whether that creation is sour or bitter, savory or sweet. But it doesn’t have to be the ruling component of the dish. It can be a flavor to enhance the experience. Too little or too much will govern whether the consumer devours it and asks for more or takes a single bite and decides it’s not for them. The more often readers partake of these dishes, the more their palates change and they develop a taste for these interesting stories.

The choices authors make about what historical accuracy actually means in their science fiction and fantasy have the potential to change people’s understanding of the world and show them what is possible. 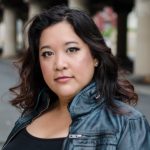 Piper J. Drake is a bestselling author of romantic suspense, paranormal romance, science fiction, and fantasy, a frequent flyer, and day job road warrior. Wherever she goes, she enjoys tasting the world and embarking on foodie adventures. Dogs—and horses—have been known to spontaneously join her for a stroll and she enjoys pausing for a nice chat with cats of all sizes, from domestic to tiger size and beyond.

Piper aspires to give her readers stories with a taste of the hard challenges in life, a breath of laughter, a broad range of strengths and weaknesses, the sweet taste of kisses, and the heat of excitement across multiple genres.