It seems fair to say that authors are constantly scrambling for time to write. I previously wrote about managing this with a baby, and I thought I had things covered. Now I have a two year old.

Who knew that a person lacking reason and driven by impulse and the need to destroy could make sipping tea and banging out some words more difficult?

My daughter is now an adorable mini-Godzilla and proud of it. I love her with all my heart, but she’s still the reason I need to write. Diapers and daycare aren’t cheap.

Here are some tricks I’ve picked up along the way for writing through the terrible twos.

The first thing is obvious. I write mentally a lot more than I used to. It works especially well on sections I’m struggling with. I might go through twenty different versions of a scene while teaching my daughter that toys don’t go in the trash, or might decide which character was secretly the villain after sharing the tenth plate of macaroni and cheese of the week. My writing is stronger when I’m forced to get it as close to perfect as possible, rather than watch the same cartoon that’s been playing for three weeks on a loop. Focus on what isn’t working and let your brain puzzle it out in the background while you have a tea party, play dress up, or whatever you’re doing with your child.

I also mentally revise what I’ve already written. Toddlers like to talk, but they aren’t the greatest conversationalists. By going over what I wrote that morning, or maybe the day before, I can try out different conversations between my characters and call it productive, instead of strange/weird. The key is that you’re keeping your brain working. Even if you don’t use any of it, you’re refining your craft. In fact, I thought of this column while cleaning the microwave. It’s not important who got it dirty, but it comes in handy that my daughter’s vocabulary isn’t developed enough to correct me when I lie to my wife.

Second, another obvious thing that builds on the first point. Mental writing is fine, but eventually you have to get it from your brain to your computer, notepad, or whatever. Having some kind of device to get your thoughts down in some form, before the mess and chaos of a toddler drive it out of your head, is vital. I use the notes function on my iPhone. It syncs to my computer automatically, and it’s easy to get in and out of, for those times when you’ve only got a few seconds before being a parent takes priority. Snack time is great for this. A small bag of fruit snacks can buy you enough time to outline a whole chapter, once you’ve got a little practice. Come up with a shorthand or bullet-point system to capture the most important information first. Then you can fill in the rest throughout the day. I only use one file, since speed is my friend, but I will occasionally start a new one when something important pops up. Do whatever works for you.

That brings me to my third tip. You have to keep the beast, I mean child, distracted. Yes, we love them and play with them for seemingly decades every day, but carving out an hour or so to write, eat, and use the bathroom without “help” may require you to give in to the TV or YouTube. I now have a screen in my office just for my daughter, complete with a fake keyboard. That’s another thing. Toddlers love keyboards even more than cats do. I don’t know what the appeal is, but I’ve sacrificed a few old ones to Toddlerzilla so that I can write without her playing amateur editor.

The decoy keyboard is a good segue to my fourth tip: Be flexible. While I was outlining this, my toddler jumped in my lap, causing me to go back from my computer to my phone. That wasn’t a big problem, though. Like I said, Apple’s Notes app syncs between devices automatically, so I can switch as I need. (Any syncable app works, though.)

My daughter kicked my hand while I was typing the next section, causing me to change the words “confession time” to “Confession Tim.” So, now I have a dropped phone, but a potential new character.

Confession Tim brings me to my final tip. You have to do what you have to do. Leave your ego out of things and get your words in. So, the confession I alluded to earlier… okay, here it is. I twerked in front of my daughter to make her laugh long enough for me to finish the outline of this post. She was getting cranky and I was afraid I’d lose my train of thought. Then I wrote down the bullet points of this column, and I’m filling in now, while everyone else is asleep.

That’s a bonus tip. I almost don’t want to include it, because it’s obvious, but seize every opportunity to write. If my daughter is napping, I run upstairs and get some words in. If she falls asleep early, or I make myself get up before I want to, I do the same. A lot of it is sleep-related. Still, any time you carve out, even if it’s just five minutes to decide on a plot point, gives your brain something to focus on and work out while you’re busy being a parent.

I hope this gives struggling toddler parents at least a glimpse of hope, no matter how small. Maybe I’ll see you all again when my daughter hits the tyrannical threes and I discover everything I was sure of was wrong…again. 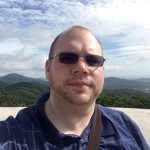 Noah is an author who primarily focuses on Urban Fantasy, Gamelit, Horror-comedy, and anything that lets him interject a little story-based levity into the world. He frequently collaborates with John P. Logsdon, but is slowly building up a catalog of solo work. His day job is supervising educational technology and online learning projects for an international university, but, through a lack of sleep and neglecting many of his obligations, he manages to release a book every few months. He currently lives in Bangkok, Thailand, with his wife, daughter, ridiculous French bulldog, and solemn and dignified reformed street cat. His website is noahksturdevant.com, but it’s usually easier to catch him hanging out on Twitter @noahksturdevant.