After finishing a working stint as a psychologist in Aotearoa, New Zealand, I (NW) visited the signing site for the Treaty of Waitangi (1840). This was a bilateral treaty between the colonising British Empire and the tangata whenua (or “People of the Land”, a.k.a. “Maori”), signed at Ipipiri (“Bay of Islands”). A video presentation spoke of the Maori horror when “the white goblins came from the sea.”

An evocative phrase that brought home how whiteness is Other, too—and, in fact, far from the global norm. But for white writers (like NW) it can all too easily feel like being the default, whiteness as the “unmarked state”—where, unless skin tone is focused on specifically, the characters are all assumed (by whom?) to be white.(1) Although we all (should) know race does not exist in biological reality (i.e. it has no scientific substance), it is ideologically and socially constructed; sometimes being used to perpetuate white supremacy, but often working as a tacit and silent structural backdrop, to hide white power and normativity within a racialised society. So how do we as ‘white’ writers avoid reinforcing white supremacy and ’normativity’? How do we prevent (as best we can) unwittingly aiding and abetting the system, through our own unfiltered attitudes and assumptions, as they leak into our stories?  What better place to start, than, as Ngugi wa Thiong’o stated, “decolonising” our own minds?(2)

First, work on becoming an enlightened creative person by learning to open your eyes and extend your awareness as an empathetic human being, cognizant of injustice and interested in contributing to solutions. This boils down to being willing to do the reading, and being willing to have difficult conversations. Knowing historical context is important too, so familiarize yourself with RaceFail ’09, where issues of race and representation were interrogated within Speculative Fiction’s (SF) social media circles. Mary Anne Mohanraj has a useful two-parter in Scalzi’s Whatever. Nisi Shawl & Cynthia Ward’s Writing the Other: A Practical Approach (2005) is an extremely useful text for learning how to respectfully populate your fiction with the real world, rather than a shallow monochrome, which just reflects ourselves. Nalo Hopkinson’s “An Ambassador from Planet Midnight” (2012) speech is an excellent (and funny) unpacking of how black people have often felt “othered” within science fiction, to the point of baffled “alien” mediation. Samuel R. Delany’s monumental “Racism and Science Fiction” (1998) contextualizes SF’s long and painful history of systemic racism, with Jeanette Ng’s “Campbell” speech emphasizing its’ fascist roots.(3)

W.E. B. DuBois‘s prescient words from The Souls of Black Folk (1903) still hold true for all BIPOC: “The problem of the twentieth century is the problem of the color line.” Having difficult conversations and reading BIPOC-authored work (fiction and nonfiction)—this is the recipe required for learning to decentre your whiteness. Maybe if deferred dreams explode, as Black poet Langston Hughes imagined, maybe they explode into a cascade of colored futures. But that would require pushing a “button” that goes beyond white privilege, and white guilt, and white greed, and white rationale, and white masculinity. Here’s the trigger: ask any white person “how does it feel” to be rightly branded as the actual problem the world over, the Caucasian problem? Help them to recognize that they are the problem.

Feel the distress, white people, for just a moment.

Realize this, and positive change may begin to happen. How? Read Janet Helm (2020) for a start,(4) who has much to say on how to develop a “positive white identity” that is progressive, anti-racist and focused on “dismantling” whiteness. (Because no, a post-racial”‘brown future” is not going to save us, while white supremacy continues to operate.)(5)

Then, learn to examine your own assumptions, via honest and trustworthy beta readers who are able and willing to see (and challenge), what you may be unaware of—for the more we can “decolonise our minds”, the more we are freed-up to imagine and shape new, alternative visions of better worlds for ourselves—and everyone else. Learn to really listen, holding white defensiveness at bay—and concentrate on developing your own voice, as Mukoma Wa Ngugi (2020) suggests.

For make no mistake, the white Empire is alive, well, and fighting back-whether it’s storming the Capitol in the US or trying to outlaw “critical race theory” in “rule Britannia” UK.  We not only need new histories—see Kehinde Andrews’ The New Age of Empire—but we need new futures too. Futures that embrace everyone—and acknowledge (rather than hide or gloss over) whiteness.

Let’s push the white button, and start any painful changes that may be needed in our writing.

After all, God is Change. (Earthseed; Octavia Butler). 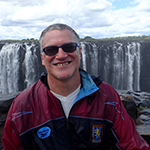 Nick Wood is a South African-British clinical psychologist and SF writer. His latest books are Learning Monkey and Crocodile (a collection of short stories and essays: Luna Press, 2019) and Water Must Fall (African Solarpunk: NewCon Press, 2020). 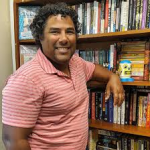 Isiah Lavender III is Sterling Goodman Professor of English at the University of Georgia, where he researches and teaches courses in African American literature and science fiction. His most recent book is Afrofuturism Rising: The Literary Prehistory of a Movement (Ohio State UP, 2019) and the co-edited critical anthology Literary Afrofuturism in the Twenty-First Century (Ohio State UP, 2020).