Note: Over the next several weeks, the SFWA Blog will be running articles, including this one, that first appeared in October 2021 in our SFWA member publication,  The Bulletin #216. We’re pleased to share these instructive and thought-provoking pieces with the wider speculative fiction community. –SFWA Publications

I’ve never believed in endings. Too often they’ve made promises I’ve simply never been able to trust. I’ve always found them to be dishonest things, fraudulent claims that a story can possibly be contained within the boundaries of narrative comfort. Too often, endings disrespect the stories that precede them, sewing up wounds for the sake of neat margins rather than actual healing.

But all stories must end—and I don’t mean that in the sense of the much-abused “death is inevitable but don’t be sad about it” metaphor. Literally, all stories must end. Every campfire dies down, every book has a final page, every reader has dinner to make and dishes to wash. Moreover, the purpose of a story isn’t to continue indefinitely. Stories are for readers, and for many readers, catharsis is a vital part of the narrative experience. In some cases, the comfort that comes with catharsis is the entire reason we want a story at all.

Catharsis has, for many, become synonymous with the ending of a story. I suspect this is the source of my struggle. As a person who lives with the effects of deep, far-reaching trauma, I’m uncomfortable with the very concept of closure and finality, especially as part of traumatic experiences. It was only once I decided to take a trauma-informed approach to narrative that I found peace with the idea of endings. It’s possible, I’ve learned, to write endings that don’t attempt comprehensive closure but instead offer compassion and respect to the trauma that characters endure throughout the plot. Those endings are, I find, infinitely more complex, valuable, and grounded.

They are the endings stories deserve.

What is Trauma, and Why Should I, a Writer, Care?

My favorite description of trauma is this: trauma is simply too much, too soon.

Here is a very boiled-down version of what that means: The human brain is prepared to process a number of things on a given day, and when something comes up that the brain is not prepared to process, is not capable of processing, the result is a change in the chemical processes that the brain uses to respond to input. This extends beyond momentary unhappiness or discomfort and extends into long-term changes to brain function.

Consider, for instance, a person who has been physically harmed by a fire. In the moment of trauma, that person’s brain was unprepared to react to the fire in a way that would keep the person safe. That person, in the future, might have an extreme response to seeing or being close to fire. This is because their brain, upon recognizing the input “fire,” activates a neurochemical response that is designed to help them escape the harm they previously endured.

Trauma is not always massive, is not always physically harmful, is not always immediately recognizable. The escape route a brain designs in response to trauma can take many, many different forms. The thing to keep in mind here is: If a difficult or unpleasant experience changes a person in a lasting way, it’s trauma.

With this in mind, you might be able to see the many directions from which trauma can originate in narratives. It’s traumatic to see your home planet blown up by a giant laser-gun; it’s traumatic to get lost in the woods and chased by a wolf; it’s traumatic to be told over and over again that your perceptions aren’t reliable. All of these events can fundamentally rewrite a person’s brain chemistry and neuropsychology, permanently changing how they will react to the world.

Accepting that trauma can look like all kinds of different things, and that it is something that alters the human brain is enormously important to the process of surviving, treating, and coping with trauma. It’s also important to the process of learning to write trauma realistically, compassionately, and respectfully. As authors, we have a responsibility to our characters and our readers.

Without this understanding of trauma, it’s all too easy to fail them both.

Okay, What Do I Do With This Information?

“A difficult or unpleasant experience that changes a person in a lasting way” is a descriptor that applies to most stories. In spite of the promises of a recent literary movement that strives to elide unpleasantness in storytelling, it’s difficult to make a narrative compelling when characters aren’t changed as a result of struggle. Further, a story in which characters endure traumatic experiences without changing in response to them is a story that can cause immense harm.

Narratives help us to understand ourselves and the world around us, and stories that depict trauma as a temporary inconvenience reinforce the idea that ongoing trauma-responses are unusual, or even a sign of weakness. This real-world impact bears out in the way many people process—or are unable to process—their own real-life traumas. Many trauma survivors find themselves questioning why they’re unable to move on from traumatic events. They’ve consumed narratives in which scary things happen, but when the scary things are over . . . everyone stops being scared. So why shouldn’t the same be true in real life?

This is part of why I don’t believe in endings. All too often, endings make an empty promise: that catharsis will simultaneously provide closure and heal trauma. Many endings, in an attempt to be satisfying, rest on the notion that the struggle is in the past and the future is hopeful.

It’s an attractive notion—and it’s a painful one, because ultimately, it’s empty. Hope and suffering aren’t mutually exclusive. Catharsis and closure don’t cure trauma, and in fact, life after trauma rarely requires or even involves either one. Living with trauma is not a matter of finite resolution; it’s a matter of integration, of allowing past and present suffering to take its place in the ecosystem of one’s life and psyche. Closure isn’t necessarily part of that process for everyone.

Most importantly, writing a narrative with a sense of compassion and respect for trauma requires the author to develop compassion and respect for traumatized people. This may seem like a simple matter of empathy, but it can be an enormously challenging prospect that involves reorienting one’s understanding of pain, change, and healing. However, this challenge is absolutely worthwhile—on a craft level, a personal level, and a community level.

This can be a tricky understanding to navigate, especially for those of us who grew up in a puritanical Western culture. Religious and philosophical traditions that align suffering with morality can be difficult to reconcile with this perspective on trauma. This is why I specifically say that suffering is not an inherently moral act; moving toward a trauma-informed perspective on narrative storytelling doesn’t necessarily require abandonment of spiritual and personal philosophies. Interrogating narrative assumptions about the moral inflection of suffering can in fact be a huge step toward integrating genuine consideration into trauma-informed narratives.

Next, consider the question of hope and resilience. Many people have internalized a notion that happiness and suffering are mutually exclusive, especially in stories. With a trauma-informed approach to storytelling, we can find the opposite to be true. A hopeful story—one that centers optimism, courage, and genuine care—not only can but must center trauma. To redact or elide the existence of the long-term effects of suffering in “hopeful” narratives is to pit hope and suffering against each other.

In reality, those who survive suffering—even those who are permanently changed by their experiences, even those who continue to suffer as a result of trauma well after the last page of the book—are and must be part of an optimistic future. A future that doesn’t incorporate acknowledgement of harm done and space for the ongoing effects of that harm is not a hopeful future at all; it’s simply a future in which disabled, mentally-ill, and traumatized people are unwelcome. A satisfactory ending to a traumatic narrative doesn’t need to eliminate the effects of that trauma. Instead, that ending can integrate the changes characters have undergone, acknowledge how they’re different because of what they’ve experienced, and respect how living with those changes may not be entirely easy.

Finally—and I say finally only because I’m running out of wordcount, not because this is the end of the work that can be done to incorporate trauma-informed storytelling into our conversations about craft — it can be profoundly transformative to reconsider notions of healing and acceptance. Healing is a word that we use to describe fixing, repairing, returning to an assumed baseline of health and well-being. Acceptance is a word that we use to describe the concept of shifting our understanding of something such that it is tolerable. Neither of these are applicable to living with trauma.

Returning characters to an imagined state of neutrality is neither possible nor necessarily desirable. The self changes as a result of trauma; I can personally attest that I can’t imagine who I would be if I had never endured suffering. A wish for that suffering to never have happened is a wish for the person I am to be unravelled and disappeared. There isn’t necessarily healing to be done, because there isn’t a wound that needs to be repaired — rather, there is a change to be understood and accommodated.

Similarly, the notion of acceptance does not apply to trauma work. Trauma occurs when something happens that is intolerable to the person experiencing it. This experience may not be universally intolerable, but that doesn’t matter; trauma is personal, not universal. An attempt to reframe the intolerable as tolerable fundamentally misunderstands and disrespects the nature of trauma. One can choose to accept one’s own history and reality, but that is entirely different from arguing that the events or circumstances of one’s trauma are or ever were acceptable.

Rather than healing or acceptance, the work of living alongside trauma and constructing trauma-informed narratives demands careful, thoughtful integration. Characters who endure traumatic events must be allowed to inhabit a world in which trauma is possible, has occurred, and continues to impact their lives. Readers who endure traumatic events deserve to read stories that acknowledge this reality.

Writers have the power and the responsibility to build those stories. It’s challenging to take a trauma- informed approach to narrative. It takes work and thought to do so. But if the stories we’re writing aren’t worth that effort, then there’s no point in writing them.

Every story must come to an end. 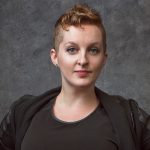 Hugo Award winner and bestselling author Sarah Gailey is an internationally published writer of fiction and nonfiction. Their nonfiction has been published by Mashable and the Boston Globe. Their short fiction credits include Vice and The Atlantic. Their debut novella, River of Teeth, was a 2018 Hugo and Nebula award finalist. Their bestselling adult novel debut, Magic For Liars, was published in 2019. Their most recent novel, The Echo Wife, is available now. You can find links to their work at sarahgailey.com and on social media at @gaileyfrey.