The ongoing conversation about writing stories more through the lens of Black joy rather than Black trauma and what it means both historically and culturally is perfectly encapsulated by how Black middle school students move through the world. I know because I’ve seen this first hand: Teaching at a middle school, I always look forward to the antics of my students and the unique lens through which they see the world. One day during their lunch period, they broke out into “Karen Encounter Drills.” One (Black) young lady played the designated Karen and would say things like “let me speak to your manager,” “no, you may not film me,” and “you’re standing too close. That’s threatening me.” Then the boys had to figure out the best way to deal with her. Their options included fleeing (though this Karen was particularly adept at cutting them off), filming her (which instigated the Karen to calling the police), or “stop, drop, and roll” (which is now my new favorite response for such situations).

There was some faux outrage when I shared this anecdote on Twitter over the use of the name Karen (though such naming has historic roots, with Zora Neale Hurston documenting the term “Miss Ann” back in the day). But those outraged missed the (more tragic) point: my students had recognized and identified a specific type of racial aggression that they know they have to learn to navigate. Yet in that realization, they chose a particular weapon of resistance: Black joy.

These students have an everyday commitment to find and center their joy despite the circumstances. Black joy—the power of Black imagination, from their laughter to their play—is their path forward because it leaves children determined to be themselves no matter the circumstances. While they understand all-too-well the oppressive forces already arrayed against them, they’re also figuring out how to imagine a world free of such forces and learning how to begin creating that world now. Their Black joy is Afrofuturism in action.

People (read: adults) notoriously underestimate middle school students. In so doing, they tend to talk down and write down to them rather than speak aspirationally to who they are and challenging who they could be. Adults tend not to recognize their sophistication, their intelligence, and what they have to struggle through and deal with. They’ve had to adapt to all of the new rules and systems changes put in place due to COVID-19 while also dealing with trauma within Black communities in the wake of the BLM uprisings over the summer. Those middle school students, like many of us, live in a place vacillating between sorrow and rage; with the threat of being crushed under the weight of history while attempting to chart a way forward on their own terms. The need for stories to speak to those experiences is something that I’ve been wrestling with in my work.

Afropessimism in Conversation With Afrofuturism

Black (hi)story has always fueled Black art. The history of Black art is being a tool honed to develop resilience and agitate as resistance. It is a communal celebration of life and culture borne out of Black experience: music, dance, visual art, stories—All informed by Black reaction to the racial caste system of the dominant culture.

“Octavia understood that these are the conditions that emerge when we are trapped in the imagination of racists, fundamentalists, and smart people addicted to hierarchy—people who don’t think of the whole … we have to claim the space to imagine ourselves beyond this world.” –Adrienne Maree Brown

In many of the stories from the African Diaspora, there is much of what Dr. Reynaldo Anderson has labeled Afropessimism. Stories that center Black trauma and the struggle of survival and perseverance within the racial caste system. The trauma narrative dominates because of the depth and constancy of racial microaggressions. Stories that—while steeped in pain, sorrow, anger, and depression—long for something better. Namely to bring down the systems designed to oppress us such as Parable of Sower (Octavia Butler), An Unkindness of Ghosts (Rivers Solomon), and The Broken Earth trilogy (N.K. Jemisin) and deal with the pathology of racism, interrogating how the wounds run deep and require years of healing. Because the trauma is real, the pain is real, the history is real. These stories teach us about resistance and resilience. Their characters never lose their agency and embrace the challenge of the oppressive systems, using them as a catalyst for how to move through the world.

The powers of that racial caste system continue their history of exerting control over our bodies and expression, attempting to enslave and regulate. Oppressive forces continue to attempt stifling Black joy, with Black people continually policed as being too loud and with microaggressions intentionally deployed to remind Black people to stay in their place. Oppression attempts to crush people, strip them of their humanity. Black joy reclaims it, using laughter, dance, music, good vibes, and stories to sustain and nurture Black humanity as a survival mechanism for difficult times. Finding happiness despite trials is foundational to the history of the African Diaspora. It’s Black people imagining a future for themselves on their terms.

“Imagining ourselves in the future is an act of resistance.” –Tananarive Due

One way to define Afrofuturism is that it centers joy and hope. Black joy is the tenacity and audacity of Black culture. It exists outside and indifferent to the gaze of dominant culture. It recalls that Black people had life, history, and culture before, during, and outside of the dominant culture’s racial caste system. It basks in the beauty of what it means to be a people and a culture.

It is Black art that centers ourselves, who we are, who we could be, enjoying that totality without guilt.

“Black joy is an act of resistance.” –Kleaver Cruz of the Black Joy Project

Science fiction stories, especially those aimed at young people, cannot neglect the canon of Black literature. Stories as community transformation. The audacious act of a people dreaming together, imagining together, and building together. Helping one another survive the abuse of the racial caste system and looking and creating a better tomorrow. Black literature reflects Black life and its tension between Afropessimism and Afrofuturism: the story of the curse of generational trauma and the continual discovery of the blessing of how generational joy allows us to break the rules white supremacy demands we follow.

Middle school students also revel in rulebreaking as joy, which is another reason why I quietly love the antics of middle school students. They learn, adapt to, and continue to find ways to outwit or circumnavigate systems designed to align against them. They are unapologetically themselves, which is the definition of liberation. They demand freedom to create room to be themselves without shame or restriction, still shinin’, living their best lives fully, daring to dance, daring to laugh, as a force for healing. Finding their joy, their reason for being, living, and moving through this world as a tool to navigate its systems.

And yet, for all of their sophistication, they are still children. Preparing for the world, and needing a place, a system, and adults around them to keep them from being crushed by its full reality. Ours is the responsibility to be present with them, fully and joyfully. Delighting in their antics. Their journey is messy, but it’s all theirs. In the end, the stories are about wanting a more just world and building towards one where we don’t have to say “Black Lives Matter” because they are as valued and protected as everyone else’s. That’s the future we work towards and write about. 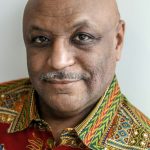 A community organizer and teacher, Maurice Broaddus’s work has appeared in magazines like Lightspeed Magazine, Beneath Ceaseless Skies, Asimov’s, Magazine of F&SF, and Uncanny Magazine, with some of his stories having been collected in The Voices of Martyrs. His books include the urban fantasy trilogy, The Knights of Breton Court, the steampunk works, Buffalo Soldier and Pimp My Airship, and the middle grade detective novels, The Usual Suspects and Unfadeable. His project, Sorcerers, is being adapted as a television show for AMC. As an editor, he’s worked on Dark Faith, Fireside Magazine, and Apex Magazine. Learn more at MauriceBroaddus.com.