Editor’s Note: This is the first installment in a new SFWA Blog series, Romancing Sci-Fi & Fantasy, from our Romance Committee! Expect new posts in this series in the coming months.

Science fiction and fantasy (SFF) are epic magpies. Our genres borrow bits and pieces from all the other ones and add in futuristic tech and/or magic to create mind-bending stories. They even borrow from that billion dollar industry that many swoon over, some jeer at, and others ignore: Romance.

When one hears romance novel, the image of a traditional bodice ripper usually comes to mind. Corsets, maybe along with some kilts–sound familiar? Those stories have a well-earned readership, but they aren’t the only romance out there. As clever as SFF is about storing destruction codes deep within artificial intelligences (AI) or tying an invisible knot of confusion, you may not see the romance elements. But for me, I see romance everywhere.

Sometimes it’s pretty front and center. In the novella This is How You Lose the Time War by Amal El-Mohtar and Max Gladstone, Red and Blue revolve around one another throughout time from different sides of a war, and it’s poetic! Red and Blue are enemies intent on killing one another—until they’re intent on escaping together. This spectacular telling blew our mortal minds, and even if we missed a step or two along their path to romance, it’s clearly passion amidst a uniquely written sci-fi narrative.

Other times, romance is woven into the bedrock of a story. Like with the television show Firefly’s Zoe and Wash. “Bedrock?” you say. “Bedrock,” I say, despite them not being the show’s focal couple. Without the continuous Zoe–Wash banter, Firefly . . . well. Let’s face it, Firefly would’ve still been humorously fantastic, but it would’ve been less so without the comfort, strength, and saving of food those two provided one another. Their relationship was romance on a stable level that readers and viewers alike craved.

Those are pretty easy examples, so how about Essun and Hoa in The Broken Earth novel series by N.K. Jemisin. Romance here? This entire series flips, cracks, and rips apart so many things that my brain can’t begin to grasp all of it. But that also means it shouldn’t be surprising that the romance that transforms the world isn’t heteroproductive, and it goes deeper than bedrock. Jemisin wrote a romantic scene between a stone eater and an orogene, and she birthed something new from it. Romantic? Hell, yes, romantic.

There’s even romance in the fantasy drama The Witcher. Romantic elements are present in the books by Andrzej Sapkowski, the Netflix series, and, depending on your choices, even the videogame. The most beautiful thing about Geralt and Yennefer’s relationship is that it isn’t prioritized. Yes, that’s right, their romance isn’t a priority and is still a romance. How could it be their focus when Ciri needs saving, politics need meddling, monsters need slaying, and the duo has to face all the pressures their names demand? The Witcher shows there is romance in life, even if it isn’t the main driving force in someone’s life, and it’s still an undeniable, frustratingly true love.

Just like that, we went from prominent romance in narratives to ones buried pretty deep. I see romance everywhere, on all levels, and it makes me love the books I read even more. There are books without romance, that don’t need romance, and readers that are perfectly happy without it. But borrowing from the romance genre can strengthen a story and the readers’ connection to the characters.

We all want to craft memorable characters, and the strong ones can become more enduring with a partner—two are stronger than one, as the adage goes. Princess Leia and Han Solo from Star Wars—closely followed by Ben and Rey. Paul and Chani from Dune. Nahri and Ali from S.A. Chakraborty’s Daevabad Trilogy. K and Chloe from Terry Miles’s Rabbits. Euthalia and Conrí from Jeffe Kennedy’s Forgotten Empires series. Niko and Petalia from Cat Rambo’s You Sexy Thing. Some of those names may strike a romantic chord within you?

These couples, along with countless others, are answers you get when you ask for favorite SFF media and the love stories within them. As authors, we can plot out these romantic arcs, plan on future attractions, or count on specific characters carrying an emotional load. But we can also be equally taken off guard when characters behave off-script, fall for the wrong person(s), or fail to click with their intended(s) at all. Romance may be everywhere, so you’d better watch out, it can slip in even when you’re not looking for it.

In the upcoming blog posts from the Romancing Sci-Fi & Fantasy series, we’ll talk more about the power of romance and the benefits it brings to storytelling. The posts will introduce you to some addictive old and new Fantasy Romance, Sci-Fi Romance, and Sci-Fi Fantasy with—planned and unplanned—romantic elements. Until then, happy reading and writing! 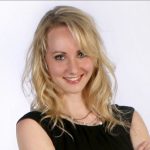 Alexia Chantel has a degree in Medical Laboratory Science. Though she retired from the corporate world when her chronic disease hit, she hasn’t been able to retire her brain and writes science fiction as A.C. Anderson and fantasy as Alexia Chantel.

She lives in Minnesota with her Siberian husky who shares her love of the snow and everything cold, her three kids who show her the world through new eyes, and her husband who balances it all out. 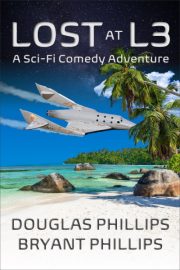