Since 2016, I’ve maintained a database of published science fiction and fantasy (SFF)[1] works by African authors[2] for the African Speculative Fiction Society (ASFS).

It is, admittedly, incomplete and limited by my collection methodology, which mostly involves soliciting information from the public (requiring validation) and trawling the internet for unreasonable periods of time. It is a work in progress but still, perhaps, useful (I am, after all, a believer in the value of Incomplete Solutions).

I initially started the database to educate myself (and maybe others) on the history of, to understand the evolving present of, and perhaps, to project the future of African SFF, which is demonstrably not a new thing, although it may be new to some readers (Welcome!).

What follows is a preliminary set of observations from the analysis of this incomplete history of African SFF, posed in response to some questions I have received about it over the last six years.

When Did the History of Published African SFF Begin?

Tricky. And there is probably no right answer since publishing from early colonial Africa was problematic and it depends on what you define as SFF. I’ve arbitrarily limited my scope to works published between 1921 and 2021, even though I don’t have any entries from 1921. Why 100 years? To quote Geoff Ryman: Because it’s easy to remember. And the first entry in the database is Cameroonian Jean-Louis Njemba Medou’s Nnanga Kon, a novel published in 1932 in Bulu. I suppose that’s as good a point as any to start. However, that’s only one way to look at things. Another is to observe the rapid increase in published works that begins in 2011, peaks in 2016, and has somewhat stabilized since (although this could simply reflect my inability to keep up with documenting new works).

My evolving opinion is that one can look at four eras of African SFF, starting with (1) the nascent works of colonial-encounter metaphors and published retellings/syntheses of mostly oral traditional storytelling from the 1920s to about the 1960s; (2) the publishing of works with genre elements from the 1960s to the early 2000s, but which were parked under the wide umbrella of “African literature” or the troublesome “magical realism”; (3) works published and identifying themselves as genre starts to become more common from the early 2000s to 2011, thanks in part to the internet; and (4) the current period, 2011 to now, of increased recognizability and visibility due to a variety of factors and actors.

Which Countries Produce the Most African SFF?

This is perhaps the easiest question to answer. It’s Nigeria and South Africa. Most people would probably have guessed that. But it’s interesting to see by just how much.

The database contains 30 nationalities represented by 497 authors, but Nigeria and South Africa make up more than 73% of the works. Reasons for this are likely colonial legacies of proximity to Western publishing, size, economics, etc. Looking at this in the context of population[3] and gross domestic product (GDP)[4] and limiting to countries with total works having proportional significance (> 1%), it’s clear that these are key factors in the trend, and the number of works is most strongly correlated to GDP with a linear regression R2 value of 0.97. South Africa produces a lot more than its population would suggest, and Ghana and Tanzania produce less. 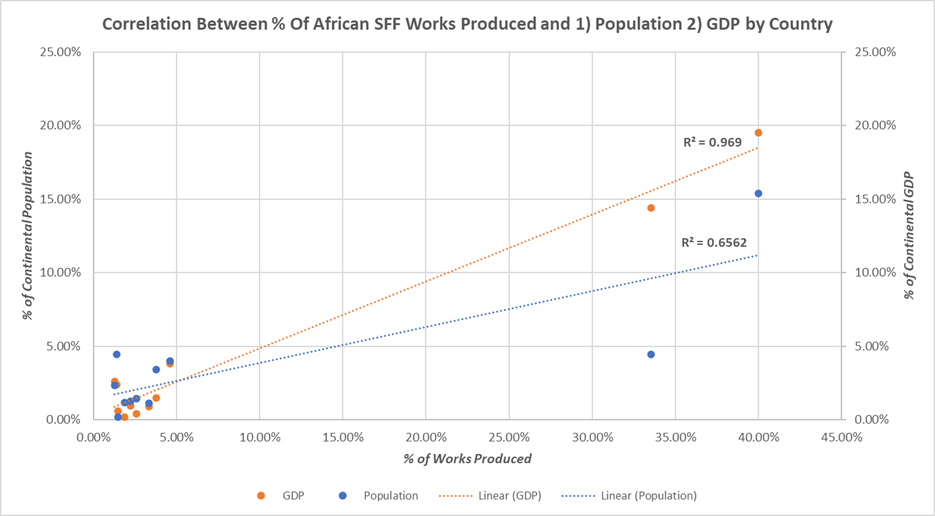 Divide the number of works per country by its number of authors to see works per capita and the picture shifts. Some countries have a few very prolific authors (Hello, Botswana’s Tlotlo Tsaamase!) or a solid stable of consistent authors (e.g., Uganda).

The current boom of African SFF is perceived to be driven by short fiction, but using the SFWA Nebula Award word count classification for length and taking the long view, the data does not bear that out. Short forms together make up 54%, while the longer forms make up 46%. 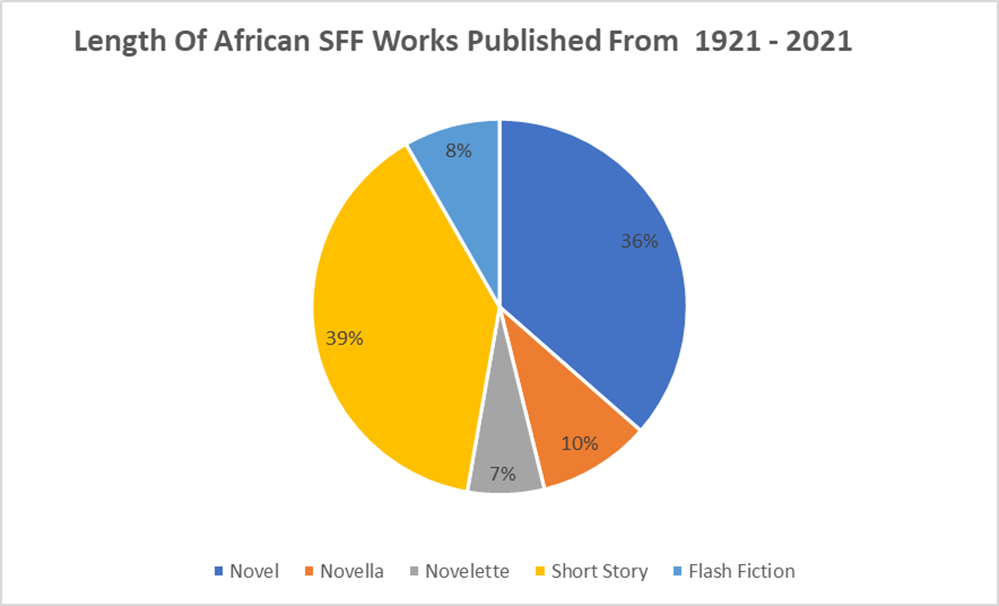 Is It True That Africans Don’t Really Write Science Fiction?

A bit of a silly question but one that comes up enough to warrant an answer. Using broad and simplified[5] genre classification, almost 40% of works published are science fiction. 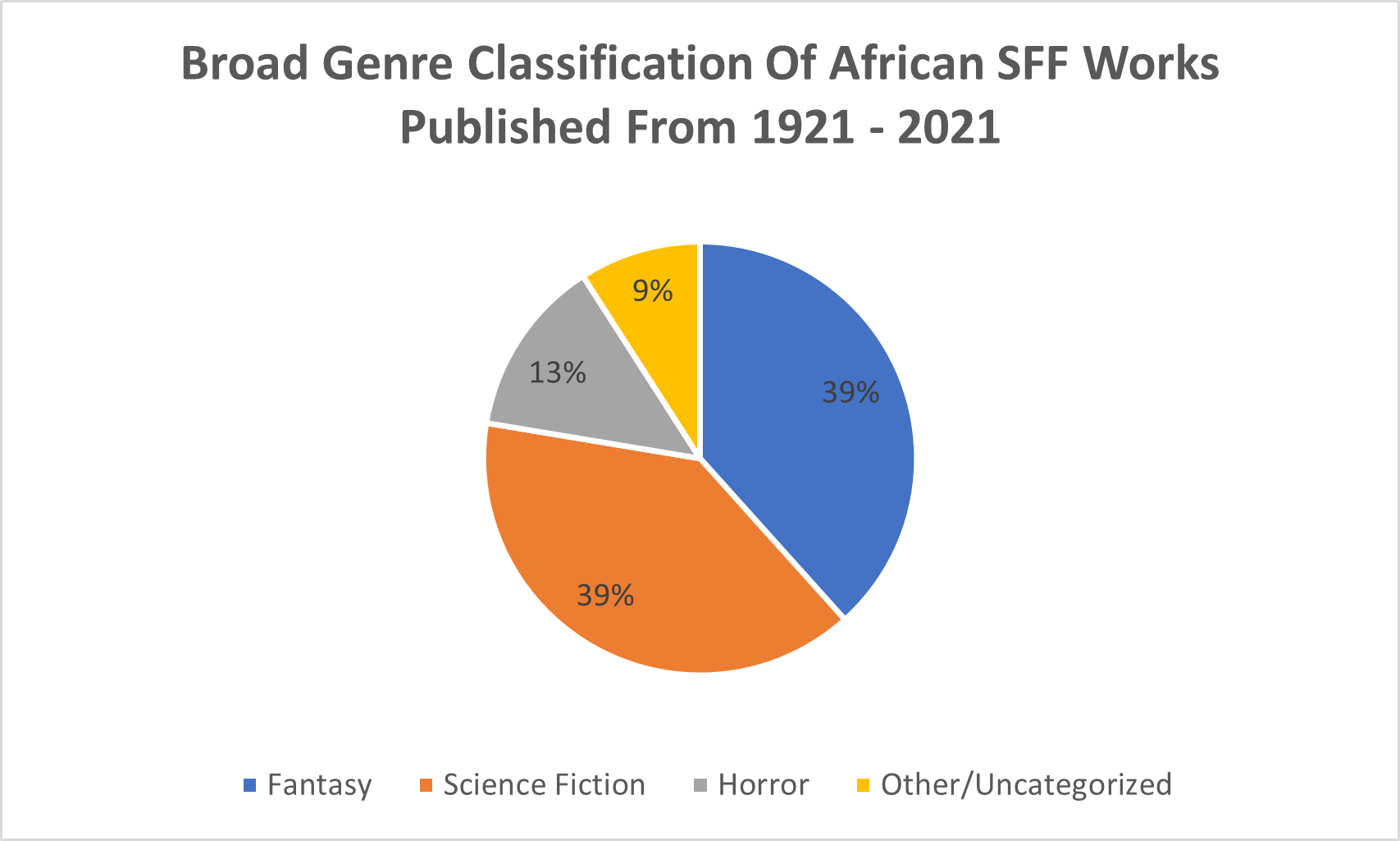 I’d be happy never to hear this question or its variants again, although there is a more nuanced discussion to be had about genre buried within it.

Is African SFF Dominated by Men?

An interesting question, given that some of the most successful African SFF works (in terms of awards and sales) in recent years have been authored by women or nonbinary authors. Sex and gender can be tricky, but working with publicly available self-identification data where available[6], we see that yes, most works are by authors who identify as male, but not by a wide margin, even though it’s more than expected, given the population split (50%). 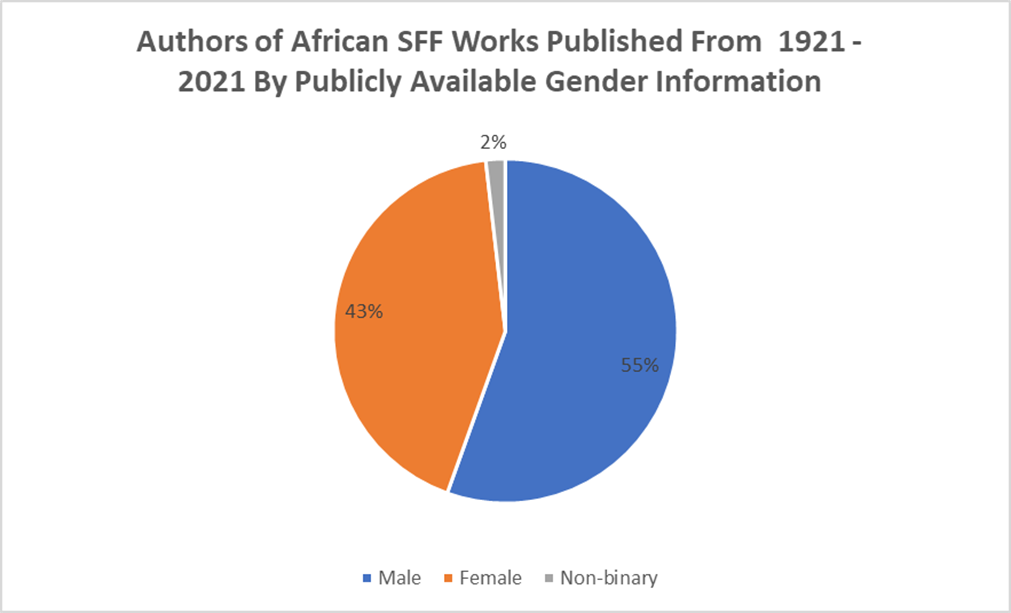 It is interesting to note that almost 70% of science fiction works were by male authors, but under 50% for fantasy and horror.

Observations presented here should be taken with consideration, given the limitations of the data (and the author). Still, at the very least, it represents a sample size, and I hope that as I continue to backfill missing data, the observations and trends will resolve themselves more clearly and perhaps show some more interesting contours.

I’d like to thank everyone that has suggested works for the database over the last six years. Special thanks to Stephen Embleton, Mame Bougoma Diene, Nick Wood, Joanna Woods, Emad Din Aysha, Chinelo Onwualu, Gail Jamieson, Mazi Nwonwu, and Geoff Ryman, who have all directly helped (or are still helping) to update and improve the database.

[1]  I use the term SFF here broadly, and it is taken to mean all speculative fiction works.

[4] Estimates for 2022 from the International Monetary Fund (IMF).

[5] Based on the dominant typical genre tropes used in primary focus as well as authors’ declared classifications.

[6] Where data is unavailable, it has been excluded. 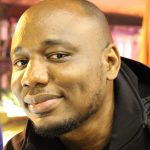 Wole Talabi is an engineer, writer, and editor from Nigeria. His stories have appeared in Asimov’s, Lightspeed, F&SF, Clarkesworld and several other places. He has edited three anthologies of African fiction: the science fiction collection, Africanfuturism (2020), which was nominated for the Locus Award in 2021, the horror collection, Lights Out: Resurrection (2016), and the literary fiction collection These Words Expose Us (2014). His fiction has been nominated for multiple awards, including the prestigious Caine Prize for African Writing in 2018 and the Nommo Award, which he won twice (in 2018, for best short story and in 2020, for best Novella). His work has also been translated into Spanish, Norwegian, Chinese, and French. His collection Incomplete Solutions (2019), is published by Luna Press. He likes scuba diving, elegant equations, and oddly shaped things. He currently lives and works in Malaysia.