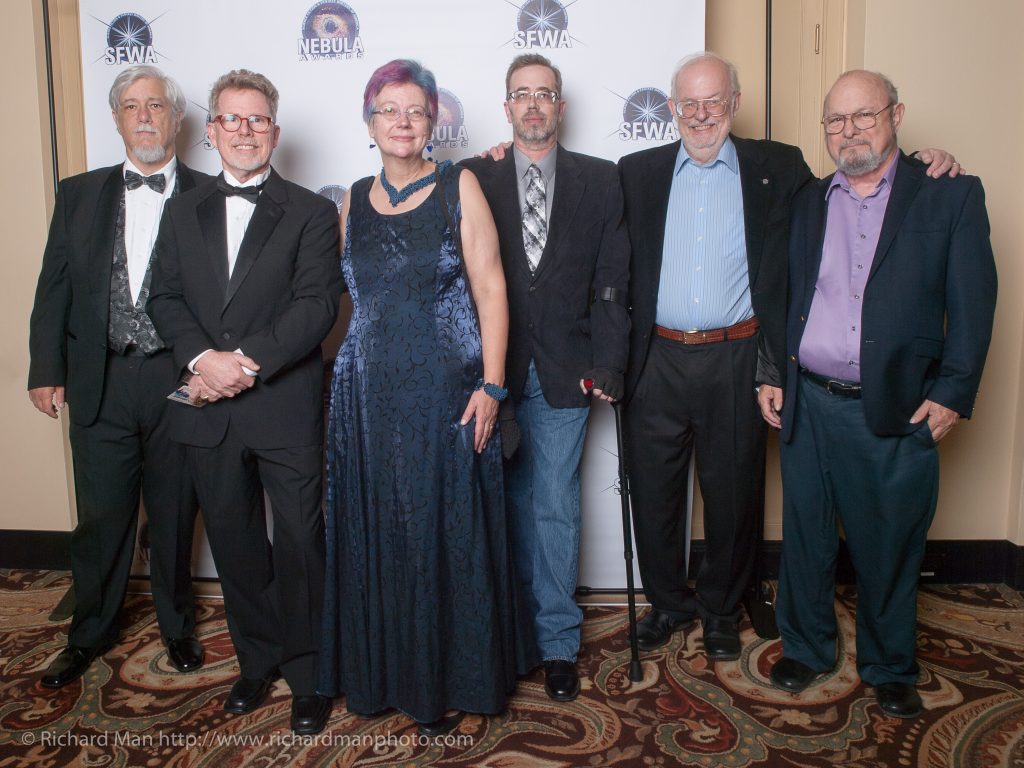 Author and former SFWA President Greg Bear (b.1951) died on November 19 following a stroke after complications during heart surgery. Bear’s first short story, “Destroyers,” appeared in 1967 in Famous Science Fiction and his first novel, Hegira, was published in 1979.

Bear won the Nebula Award for his novella “Hardfought” and his novels Moving Mars and Darwin’s Radio. His stories “Blood Music” and “Tangents” also received both the Nebula Award and the Hugo Award. In 2006, he received the Robert A. Heinlein Award.

His stand-alone novels included Dinosaur Summer, Psychlone, Vitals, and City at the End of Time. He also published numerous works that formed several different series, including Songs of Earth and Power series which included The Infinity Concerto and The Serpent Mage, the Quantum Logic series, and the Forerunner Saga. With Greg Benford and David Brin, he also wrote a trilogy set in Isaac Asimov’s Foundation universe.

Bear’s short fiction has been collected in several volumes, including Early Harvest, Tangents, Bear’s Fantasies, and The Collected Stories of Greg Bear.

In 1970, Bear was part of the group that ran the Golden State Comic Book Convention, which is now San Diego Comic-Con International. More recently, he has served on the Board of Advisors for the Museum of Science Fiction. Bear was the author guest of honor at Millennium Philcon, the 59th World Science Fiction Convention, in 2001.

Bear is survived by his wife, Astrid and their two children, Chloe and Alexandra.

Current SFWA President Jeffe Kennedy remarked, “When I took over as a newbie President of SFWA, Past-President Greg Bear was unfailingly gracious to and supportive of me. I loved his work and admired him as an author, so to discover what a truly kind person he was meant so much. He will be greatly missed by SFWA and the larger community.”

Former SFWA Presidents also wished to pay their respects to their colleague and friend as such:

“There are few people in my life from whom I learned so much, and was so fortunate to have known, than Greg Bear.” – Paul Levinson

“Whether or not he was one of the greatest novelists of speculative fiction may be questionable for the ages to argue but a Prince of SF he surely was. From the beginning to the end, he was a sincere literary artist, scientifically learned, a speculative visionary, if not the king of that which has no king, surely a prince seated at the SF table.” – Norman Spinrad

“Greg Bear and I were friends for thirty years. What I loved about his work was that it freely embraced the entire scope science fiction has to offer: from the far future (Anvil of Stars), through the present day (Quantico), to cavorting with creatures we know only from the distant past (Dinosaur Summer), he took us on a grand tour of his boundless imagination.” – Robert Sawyer

“Greg was my vice president, unflappable, always supportive, funny, endearing, and smart. Heart-breaking he is leaving us so soon.” – Jane Yolen

“Greg and his wife Astrid were always welcoming to me in the science fiction community, even when I was nobody. Greg treated me like an equal from day one. Over the years, he welcomed me to the field of hard science fiction, inviting me to speak at events and encouraging my work. It meant the world to me. My thoughts go out to Astrid and all his loved ones, and to his many readers and fans worldwide. He was an amazing person.” – Catherine Asaro