Climate change is the top public health emergency of the twenty-first century. Naturally, you may be inclined to write a story somewhere on the dystopia-to-solarpunk spectrum that mitigates your burgeoning existential climate dread. Perhaps one of your characters works in healthcare and is struggling with an ever-increasing burden of antibiotic-resistant infections related to climate change. What might that look like?

Among other things, climate change represents an increase in global temperature, which is where Dr. Protagonist will start—heat and antibiotic resistance. As you may or may not recall from chemistry class, reactions occur more easily/rapidly when heat is applied. Bacteria cope with environmental stresses (e.g., fighting other bacteria, toxins, ultraviolet radiation) by mutating their DNA. Why’s that important for Dr. Protagonist? Because more stress coupled with a warming environment means more frequent opportunities for bacteria to mutate and, therefore, more opportunities to develop antibiotic resistance. You may be thinking, ‘not all mutations are beneficial.’ That’s true. But a bacterium that lives in our intestines (and often causes urinary tract infections), Escherichia coli, has a doubling time of twenty minutes. If a single bacterium has an antibiotic-resistance mutation that enables its survival, it can rapidly proliferate and replace non-antibiotic-resistant bacteria.

So, bad news: heat speeds development of antibiotic resistance. But does Dr. Protagonist have more antibiotic-resistant infections to treat as a result? The short answer is yes, most likely. Many studies have investigated whether infection rates correlate with increased temperatures. By and large, these studies show that higher local temperatures correlate with higher infection rates (including bloodstream, urinary tract, and surgical site infections, and pneumonia, among others). Some studies also show antibiotic-resistant bacteria more often cause infections at higher temperatures.

To recap, more heat, more infections, more antibiotic resistance. This means the infections Dr. Protagonist sees will be harder to treat. Annually, the pharmaceutical industry does not develop many new antibiotics. One major reason for this is financial disincentives. Companies don’t want to develop costly antibiotics that will be used sparingly (i.e., no ROI) to diminish antibiotic resistance. In addition, antibiotic treatment durations are short—companies would rather develop drugs patients must take for life (e.g., drugs for diabetes, hypertension, and high cholesterol). Where does this leave Dr. Protagonist? Their arsenal of antibiotics will be insufficient to cure a larger and larger percentage of patients.

Mildly put, this is a Big Problem. Dr. Protagonist’s world collapses without antibiotics. All medical care we consider routine cannot be achieved without antibiotics. Organ or bone marrow transplant? Nope—immunosuppression virtually guarantees an infection. Surgery? Prophylactic antibiotics are given prior to every surgery. If bacteria are resistant, post-surgical infections are a certainty. No more lives saved after major traumas. No cardiac bypass surgeries to prevent heart attacks. What about debilitating but not uniformly fatal conditions? Ear infections? Diarrheal illnesses? Parents know how miserable their children are when they’re sick. Not to mention parents who can’t work when children are home sick. This leaves Dr. Protagonist morose—they can no longer help their patients.

Severe malaria leads to hospitalizations and/or death. Malaria is less severe in endemic (i.e., active transmission) areas, as people are often exposed to it and build up a tolerance. When people move away from endemic areas and return home to visit, they can become severely ill with malaria. This is very relevant to climate change. How? Malaria vectors will not only spread but also move as the climate changes. Mosquitoes may ascend mountains to malaria-naïve cities or have drastic continental shifts, exposing new populations. Dr. Protagonist is working at a hospital that’s never seen malaria before, when suddenly, BOOM, the intensive care unit is full of critically-ill malaria patients. And where does antibiotic resistance come in? People naïve to malaria have no immunity—they’re more likely to die and/or be hospitalized, and hospitals are hotspots for antibiotic resistance.

Severely-ill hospitalized patients require life support in various forms. When your lungs stop working, a mechanical breathing tube is placed inside them, bypassing your body’s natural defenses against bacteria. Mechanically ventilated patients are at a significantly increased risk of pneumonia. In addition, ventilated patients require bladder catheters (you can’t get up to pee) and catheters in blood vessels to deliver drugs and fluids. These plastic devices, while necessary, are breeding grounds for infection. When devices become infected, the infections are more likely to be antibiotic resistant, and patients have higher death rates. Among patients with COVID-19 (who have prolonged hospital stays due to illness severity), hospital-onset infections are more likely because of the (necessary) use of multiple life support devices. Following the COVID-19 thread, pandemics (and therefore, severe illnesses requiring hospitalization) will become increasingly likely with climate change. Zoonoses, i.e., infections coming from animals, will become increasingly common as habitats are destroyed, and animals and humans overlap more frequently. Concurrent pandemics and ever-increasing illness acuity among hospitalized patients push Dr. Protagonist’s hospital toward collapse. Bad news.

These are just some of the big changes that can occur and are by no means all-inclusive of every possibility in the realm of antibiotic resistance. Undoubtedly, there will be unforeseen avenues of antibiotic resistance as the climate changes. What will melt with the permafrost? How does oceanic plastic pollution increase opportunities for antibiotic-resistant flesh-eating bacteria? 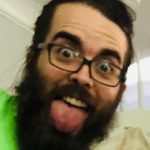 Jason P. Burnham loves to spend time with his wife, children, and dog. Other than being a writer, he is an infectious diseases physician and clinical researcher. He also co-edits If There’s Anyone Left, a magazine of inclusive speculative fiction with his friend C.M. Fields. Find him on Twitter at @AndGalen.