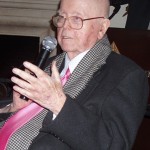 Frank K. Kelly (1914-2010) died one day short of his 96th birthday on June 11. Kelly began publishing stories when he was just 15 with “The Light Bender” appearing in the June 1931 issue of Wonder Stories. Over the next five years, Kelly published a total
of ten stories in Wonder Stories, Amazing Stories, and Astounding Stories, ending his run with “Star Ship Invincible” in the January 1935 issue of Astounding. In 1979, he collected three of his short stories in the collection Starship Invincible.

In an interview in the late 1980s, Kelly demonstrated pride in his work as a science fiction author, noting that Mike Ashley was including a section on him in a history of early science fiction and that Richard Lupoff had written an article about him for Science Fiction Review. Kelly published his own reminiscences as “My Interplanetary Teens” in Atlantic Monthly in July 1947 and reprinted in Fantasy Commentator in Summer 1989. In 1996, Kelly was inducted into the First Fandom Hall of Fame.

Kelly, who was born in Missouri, went on to work for the Kansas City Star, served in World War II, worked for Harry S. Truman, and was vice president of the Center for the Study of Democratic Institutions. He co-founded the Nuclear Age Peace Foundation in 1982, which established the Annual Frank K. Kelly Lecture on Humanity’s Future in 2001. Kelly also continued to publish non-genre fiction with stories appearing in The New Yorker, Story Magazine, and Esquire.