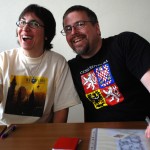 Recently, you completed the final Ambergris Cycle novel, Finch. What are some of the reactions you have heard in regards to it?  In particular, what were some of the weirdest comments made about the novel and your writing in general?

I’m generally very pleased with what people have had to say. Each book is different than the last, and I know that means I pick up some readers each time and lose a few, too, and that’s fine. With regard to Finch, I think a lot of readers who thought I did more leisurely-paced fiction were surprised (although they shouldn’t have been) that I could write what amounts to a thriller-noir-spy story mixed with elements of visionary fantasy. It’s also a book that doesn’t have any desire to support the status quo or to let things return to “normal,” and a book making very pointed statements about what it’s like to live in a failed state. In other words, it’s, in part, a book about our present and how we got here, and it’s also about one particular person trying to negotiate living in a terrible place. But none of that works without the fantasy setting, which allows me to get up-close-and-personal while also getting some distance from real-life events so I don’t wind up lecturing readers.

I think the weirdest comments about my writing in general stem from the mistaken assumption that because I make myself widely available for interviews, aggressively tour, etc., that somehow my fiction is overly commercial. The fiction is always deeply personal and deeply felt. The second weirdest comments, and they’re not the norm, are, ironically enough, when someone calls the work “weird” in the sense of “too strange.” I think that it’s hilarious to be called too strange in a field like SF/fantasy.

Luckily for me, I suppose, in the current publishing environment, Finch seems to be “just right” for most. I’m just happy that the book is being read the way I intended for it to be read, and humbled by the positive response.

You bring up the personal/public divide.  Have you ever encountered readers who have confused fact and fiction in your works?  If so, how have you responded (if you did, in fact, respond) to such conflation of the two?

All the time. I put a lot of odd facts from history into my fiction, so readers often think something’s made up that’s from real life. But that’s the point—our world is so wide and deep and strange. As for how I respond, I just gleefully tell them the truth and usually they’re delighted to hear it. People want to know the world’s mysterious and odd.

According to a few posts you have made on your blog, you have quite a few projects in development, from kosher imaginary animals to a second steampunk anthology to an untitled anthology of weird fiction, as well as all other sorts of projects in-between.  What can you tell readers about your plans for 2010 and any releases that may come out before year’s end?

The Kosher Guide to Imaginary Animals I co-wrote with my wife Ann, and comes out in early April. It’s exactly what it sounds like, copiously illustrated and lovingly designed by that mad genius John Coulthart. My story collection The Third Bear comes out in July, with a nonfiction collection called Monstrous Creatures shortly thereafter. Our Steampunk Reloaded anthology comes out in October, and then the big book of the weird fiction from Atlantic/Corvus in November. It’s a 750,000-word, 100-year reprint antho focusing on all permutations of the “weird tale,” from pulp to literary. My wife Ann and I have had an intense experience thus far, trying to make sure we don’t miss anything, and debating the relative merits of various authors and stories.

I would imagine that after reading for several anthologies that a huge mass of books has overtaken your living space.  Have you ever found yourself wondering if you had a book addiction and if so, have you ever tried to cut back on your purchases?

Because of the book reviewing we get probably a dozen books a day, but that’s a particular type of sample. So we do buy a lot of books, too. It seems impossible to avoid, especially since the local library’s looking sadder and sadder. It’s an addiction I can live with.

Be honest, how much has having to stare at and read “weird” almost every day for months now affected your perception of things?  Is weirdness a state of mind or a state of being?

Ha! Seeing the clichés in published fiction is an eye-opener. As I commented on my blog, there are a lot of classic ghost stories where at the end the protagonist turns to someone and says, for example, “I enjoyed meeting your son” and that someone says back, “My son’s been dead for twenty years.” It becomes tedious after the eighth or ninth iteration, and it’s made us impervious to the charms of a lot of ghost stories, and to define the “weird tale” as something a little more visceral—although it’s still a kind of “know it when you see it” thing to some extent. The overall effect is both exhilarating and horrifying and dull-ifying. It’s made us reevaluate some writers and stories. It’s also made us adamant not to just put something in for historical reasons. Everything in there has to be readable to a modern audience, even if still challenging. And, er, one unexpected result is that I do find shadows and whatnot at night a lot creepier.

Based on what you and Ann have been reading, what are some of the weirdest “real” creatures that have ever appeared in story?

I don’t know about real, but the ant-eater in Tanith Lee’s “Zelle’s Thursday” is remarkable, and I want to read this story called “The Bloat-Toad” that I heard about recently. Caitlin R. Kiernan does a nice job with weird critters. I like to write about them, too. I had a frog fixation in my fiction for several years. Then meerkats. Then squid. Then fungus (which isn’t, I guess, an animal, although they share some human DNA—crafty things fungi; be careful, because turn your back just once, and—). Then bears, and most recently a talking rabbit. Even a rabbit can be a strange thing. Friends of ours in Berlin have a brown one with floppy ears and rough fur that, because the ears go over the eyes, looks like just a tiny bison. In fact, that’s what I thought it was the first time I saw it, which was a little disconcerting. My friend K.J. Bishop has me interested in drop bears, though.

Jeff VanderMeer is a two-time World Fantasy Award winner and has been a finalist for the Hugo Award, Nebula Award, Shirley Jackson Award, Philip K. Dick Award, and many others. Current projects include The Kosher Guide to Imaginary Animals, his forthcoming story collection The Third Bear, nonfiction collection Monstrous Creatures, and anthologies co-edited with his wife ranging from Steampunk Reloaded to a big book of weird fiction for Atlantic/Corvus.

Larry Nolen is a history and English teacher who has taught for most of the past ten years in Tennessee and Florida, in both public and private school settings.  Fascinated with languages from an early age, he devotes much of his spare time to reading and translating interviews and articles from Spanish into English. Larry also has an unhealthy fascination with squirrels and dreams to one day edit an anthology of squirrel SF. His blog can be found at ofblog.blogspot.com.