Some things I’m influenced by currently: 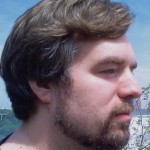 Paul Jessup has been published in a slew of magazines(in print & online) and a mess of anthologies. He has a short story collection out (Glass Coffin Girls) published in the UK by PS Publishing, has a novella published by Apex Books (Open Your Eyes), and has had a graphic novel published by Chronicle Books.

He was also a Recipient of KSU’s Virginia Perryman Award for excellence in freshman short story writing in 2000.